Kim Ha-neul and Jang Keun-suk in the park 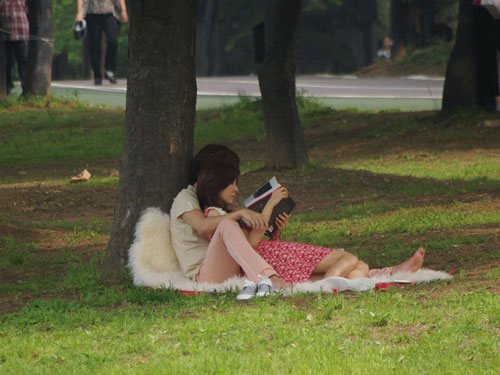 A netizen uploaded a picture taken from a movie site.

Two pictures were uploaded on an online community site on the 3rd. They were of Kim Ha-neul and Jang Keun-suk from the movie "You Pet" shooting site.


In the picture, the two people are on a white carpet on the grass, reading together. They both look like a real couple as Kim Ha-neul is leaning on Jang Keun-suk.

Those who have seen the picture say, "It looks like they're a real couple", "I look forward to the movie, I wish it comes soon", "I envy Kim Ha-neul", and more.

Meanwhile, "You Pet" is based on a Japanese comic about a successful fashion editor who coincidentally gets to live with a handsome guy. It was made in 2003 as a drama in Japan and recorded a high rate.

"Kim Ha-neul and Jang Keun-suk in the park"
by HanCinema is licensed under a Creative Commons Attribution-Share Alike 3.0 Unported License.
Based on a work from this source