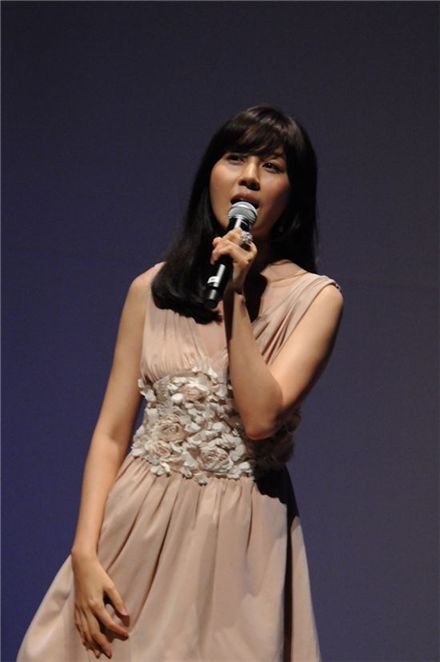 Korean actress Kim Ha-neul performing at her fan meeting held in Tokyo, Japan on June 26, 2010. [J. One Plus Entertainment]

Hallyu star Kim Ha-neul has successfully wrapped up her first-ever solo fan meeting in Japan over the weekend, according to her agency J. One Plus Entertainment on Wednesday.

J. One Plus explained in a press release that the actress held a fan event titled "Kim Ha-neul's Love Letter", which was hosted by Yamaha A&R and held at Tokyo's Ginza Yamaha Hall on June 26. Tickets for the event are said to have sold out in 15 minutes after going on sale on the Internet last month.

"Entertainment industry officials in Japan have completely fallen for Kim Ha-neul's chameleon-like charms", an official at J. One Plus was quoted as saying. "We believe she will be easily loved in the Japanese market and we will carefully look over all the offers we receive".

The actress, who flew into Japan Haneda Airport last Friday, was mobbed by hundreds of fans who showed up at the airport and conducted exclusive interviews with seven local media outlets including Asahi TV.

The following day, before the fan meeting, Kim held a press conference which was attended by some 100 major media outlets.

During the fan meeting, Kim told the host she "was so nervous that [she] could not get any sleep" the previous night. She entertained fans with details about her family, her debut years and anecdotes from shooting "My Girlfriend is an Agent", "On Air", and "Road No.1".

She also performed two songs, "First Love" by Korean singer Lee So-ra and "Goodbye Day" by Japanese singer Yui, and handed out logo-imprinted umbrellas, hats and badges to fans as a gift.

Unlike most promotional events of male Hallyu stars which are usually attended by middle-aged women, Kim's fan meeting attracted many women in their twenties and male fans as well.

Kim, 32, has enjoyed steady popularity in Korea since her debut in 1996. She has starred in numerous hit TV dramas and movies, including SBS TV series "On Air" last year and hit film "My Tutor Friend" in 2003 with fellow Hallyu star kwon Sang-woo.

Her most recent comedy action pic "My Girlfriend is an Agent", co-starring actor Kang Ji-hwan, placed her onto stardom throughout several countries in Asia including Vietnam, Singapore and Hong Kong.

She currently stars in MBC's war drama "Road No.1" alongside actors So Ji-sub and Yoon Kye-sang. 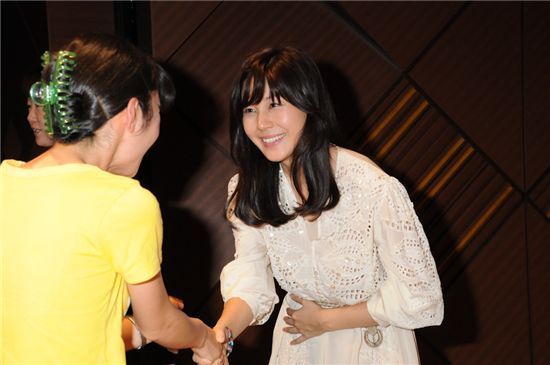 Hallyu star Kim Ha-neul shakes hands with a fan at her fan meeting held in Tokyo, Japan on June 26, 2010. [J. One Plus Entertainment]

"Kim Ha-neul heats up Japan fan meeting "
by HanCinema is licensed under a Creative Commons Attribution-Share Alike 3.0 Unported License.
Based on a work from this source