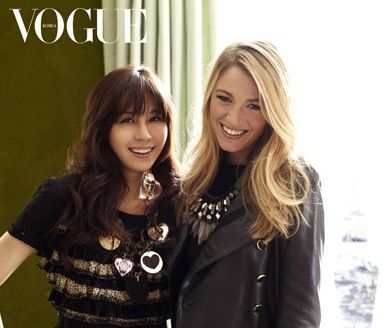 Kim proved herself a box office guarantee with her latest appearance in the film "My Girlfriend is an Agent", while Lively is credited as a key figure in the enormous success of "Gossip Girl". The two were invited to Burch's residence at the luxurious Pierre Hotel in Manhattan and had a fun time trying out new clothes designed for the upcoming fall season.

Burch said that she was happy to see Kim radiate the beauty of the brand. Kim has a unique charm, Burch added, and she exudes cute, feminine or sexy styles in the same outfit.

On meeting the designer, Kim said, "As an actress I've always had a deep interest in fashion and style, so meeting Tory, the inventor of Reva Flat Shoes, was meaningful to me in many ways. I also really enjoyed meeting Blake because we were able to share so much as actresses as well our thoughts on fashion".
__________________
Kim Ha-neul (left) with Blake Lively /Courtesy of Vogue Korea