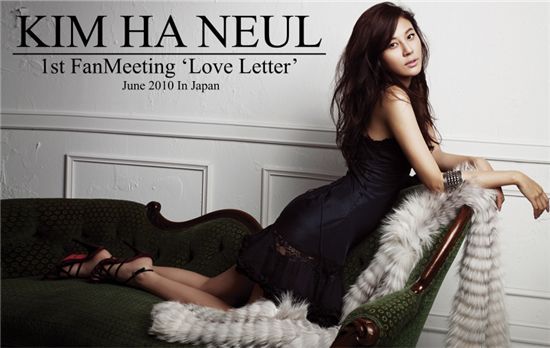 Korean actress Kim Ha-neul will hold her first-ever solo fan meeting in Japan on June 26, according to her agency J.One Entertainment on Monday.

J.One announced in a press release that the actress will be flying to Japan in June for the event titled "Love Letter" to hosted by Japanese company Yamaha A&R at the Ginza Yama Hall in Tokyo.

"We have gotten a lot of questions regarding the fan meeting", stated A&R. "Many of the fans are excited for the actress to visit the country".

"I am really looking forward to meeting my Japanese fans. I am working hard in preparing for the event and hope that I show my best for them", Kim was quoted saying.

Kim will sing two songs, reveal never before seen footage from her dramas "On Air", "Road No. 1" and from her movie "My Girlfriend is an Agent", hold a surprise event, and shake hands with her fans.

A representative from J.One's overseas marketing team explained, "The interest for Kim Ha-neul is growing. She is being acknowledged for her 10 years in the entertainment industry for her classic look and acting skills".

Kim, 31, made her debut in the industry as a model in 1996. She starred in numerous TV series and movies including "Romance" and "On Air" and hit movie "My Tutor Friend" alongside Hallyu star kwon Sang-woo.

She is currently finishing up the production of MBC TV series "Road No. 1" alongside actors So Ji-sub and Yoon Kye-sang.

"Kim Ha-neul to hold 1st fan meeting in Japan in June"
by HanCinema is licensed under a Creative Commons Attribution-Share Alike 3.0 Unported License.
Based on a work from this source