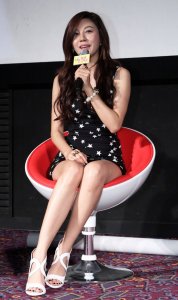 Kim Ha-neul will play a 20-year old lady with the IQ of a 7-year old in drama series to be produced within the upcoming SBS series "On Air".

In the series "On Air" which follows the story of a broadcasting company, Kim Ha-neul plays the picky top actress Oh Seung Eun, and will play the role 7-year old IQ role in the "Psycho but its okay" that is produced within the series.

"Psycho but its okay" is the story of a 20-year old lady with the IQ of a 7-year old that meets a female doctor and shares friendship. "On Air" will portray the process involving the scriptwriter, producing director, actors, and managers to create "Psycho but its okay" from start to end. Kim Ha-neul will play two roles. Oh Seung Eun who has much pride expresses her discontent with the role and argues with the writer.

Meanwhile, the production crew will leave for Taiwan on the 20th for an overseas location shoot. In Taiwan, writer Seo Young Eun (played by Song Yoon-ah) leaves for a resort abroad not willing to write, and scenes of the production team within the series on an overseas shoot for "Psycho but its okay".

The "On Air" production personnel commented, "It is practically producing two series so the production process is very interesting. Because the Taiwan shoot involves two different plots, we will be incredibly busy keeping up with the schedule".