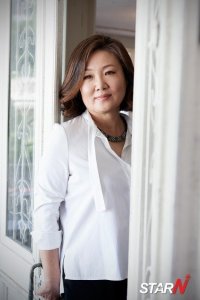 Kim is the first Korean celebrity to receive the International Cooperation Award, whose previous winners include Hong Kong star Leslie Cheung. Kim's agency cited the event organizers as saying that the actress received the award for her outstanding acting in TV dramas and movies that have aired in Japan and for contributing to movie exchanges between Korea and Japan.

Kim has appeared in all four "season series" of drama director Yoon Seok-ho, including "Winter Sonata" and "Summer Scent". In addition, she has gained popularity in Japan for her role in the movie "My Brother", which also stars Won Bin. Kim is also one of the few middle-aged Korean celebrities to appear in a Japanese TV commercial.