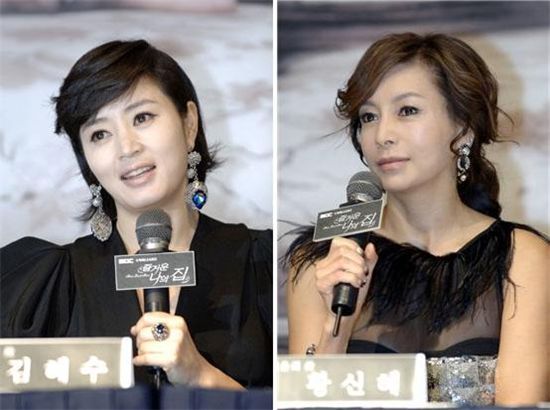 From left, actresses Kim Hye-soo and and Hwang Shin-hye talk during a press conference for MBC TV seires "Home Sweet Home" at the Grand Hyatt Hotel in Seoul, South Korea on October 19, 2019. [MBC]

"The three are friends who spent their childhoods together. Yoon-hee (Hwang Shin-hye) and Jin-suh (Kim Hye-soo) have talked a lot since they were young. And Sang-hyun (Shin Sung-woo) is the first love to both female characters but Jin-suh marries him, taking away Yoon-hee's only man. That is why it becomes Yoon-hee's goal to beat Jin-suh", Kim Hye-soo explained of the story to upcoming MBC TV series "Home Sweet Home". The four actors gathered at the press conference for "Home Sweet Home" on Tuesday had definite characters -- from Kim Hye-soo the eloquent speaker who would add on descriptions, to explain what she feels to Shin Sung-woo who slowly spoke of only what he need to, to Hwang Shin-hye who with an innocent expression explained the surprise and excitement she felt when she received the script for the show, to Lee Sang-yoon who seemed a bit nervous being amongst his senior actors. But as soon as they were asked how they came to star in the show, as if promised, they became busy praising the script. Below are excerpts from the press conference.

Q: Tell us briefly about the roles each of you have taken on in the drama.
Hwang Shin-hye: I've taken on the role of Mo Yoon-hee. She's someone who has a strong desire to gain everything that she wants and is the most strongest and spiteful role I've ever played. I'm ready to be scowled upon by viewers. (laugh)
Kim Hye-soo: I play the role of Kim Jin-suh, a psychiatrist. She has lived an easy life and has a warm heart. But in the meantime, she's someone who tries very hard to become someone who seems perfect in other people's eyes. She has pain that people cannot see from the outside.
Shin Sung-woo: I play Sang-hyun who is Jin-suh's husband and a part-time instructor. He's a kind person but I'm sometimes flabbergasted about him. “How could someone be this nice? Is this possible?) (crowd laughs) He can't refuse anyone so he sometimes fails at drawing a clean line. He's someone who gets pushed back and forth between Jin-suh and Yoon-hee.
Lee Sang-yoon: I play Kang Sin-woo, a short-tempered detective in the crime department. I trace the questionable death of Yoon-hee's husband (Kim Kap-soo).

Q: Is there a particular reason you decided to take part in the drama?
Hwang Shin-hye: I just found myself getting completely immersed with Yoon-hee. I fell for it the moment I read it, thinking 'Yes, this is it. This is crazy'. (laugh) And it turns out that everybody who is taking part in the drama thought the same way. I think that's what unique about our show.
Kim Hye-soo: I took part because of the script as well. I hadn't been planning on doing it but the director of the drama department came to me on the day of recording for my talk show “Kim Hye-soo's W.” I had known him since the days of “Three Families Under One Roof” and he recommended I take a look at the script so I did. And it turned out that it was fun. I've seen my share of good and bad scripts but it's not easy to get a script that was as good as this. It's not something that can happen just because the actor wants it to happen.

Q: What about the script was so mesmerizing?
Hwang Shin-hye: That I could sympathize with it. I took on the drama because I could relate to it while reading the script. Every line was so realistic and I was thinking, 'Wow, this is so true'. I could wholeheartedly relate to the lines Kim and Sin say to each other when they fight as a married couple in the drama, that's how realistic they were. So I end up reading their lines as well when we're doing rehearsals. (laugh)
Kim Hye-soo: Basically, it's about human relationships. And I'm sure all dramas do but we focus more on the density of those relationships. You'll also know this once you see it but it does a great job at portraying how women feel. Relative deprivation, loss and the misunderstandings that root from such emotions. I personally haven't liked dramas where the sweet main female character lives with the bad woman being mean to her and suppresses her emotions. I also felt a great amount of repulsion to dramas which demanded that from the female characters. But in our drama, Yoon-hee isn't just a bad woman and Jin-suh isn't just a woman who is always shedding tears from suffering.
Sin: I'm not married right now but the way that married couples fight or the conflicts that I have seen them go through from people around me is exactly the same as observed in our script. 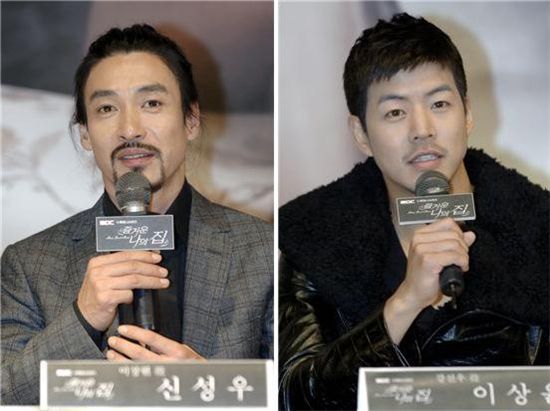 Q: Hwang Shin-hye, you must feel a bit burdened as well about having to play the bad woman.
Hwang Shin-hye: I do a bit. I myself sometimes feel that Yoon-hee is a horrendous character while playing her. I sometimes get frightened thinking, “Why is this woman so terrifying?” I think I maybe had one or two lines which I said cheerfully but that was it. So I find myself completely worn out after acting out a scene. (laugh) In any case, I'm ready to be reproached severly.
Sin: Those of you who will watch the show will criticize Yoon-hee at first but love her just as much later on.
Kim Hye-soo: I actually like the role of Mo Yoon-hee as well. There's a charm about characters that express their desires so forcefully. Yoon-hee is stays so true to her desires that there's a chance that she may come off as a character that isn't quite realistic. In the big picture, you could classify her from being good versus evil but if you go into more detail… Wow, I'm getting goosebumps just from talking about her right now. (crowd laughs) Anyway, I looked at the script for both Jin-suh and Yoon-hee because she's not someone who you could simply regard the villain.

Q: How has it been working with each other?
Kim Hye-soo: It's been great meeting the senior actors I like. I met Mr. Kim Kap-soo for the first time [for this drama] as well. All we did was just say hello as we were walked by each other but I don't know how it is that he looks so great. (laugh)
Lee Sang-yoon: I was very nervous in the beginning. And many people had said they were worried because I was going to be working with charismatic senior actors. (laugh) But they treated more warmly than they had worried.
Kim Hye-soo: What on earth had they been worried about? (crowd laughs)
Lee Sang-yoon: They were worried whether I'd be okay because you're all strong-minded people. (laugh) But that really turned out to be mere concern. From the very beginning they approached me in terms of the acting, not on a personal level, so I was able to respond to the energy they gave off. I didn't feel uncomfortable.
Sin: For me, it's rather better working to people who are straightforward. I got the impression that Kim was a cold person at first but we now walk hand-in-hand to the camera when we get to the set. And I think I work well with Hwang because we've worked together before. I've been blessed. (laugh)

Q: There's a tough competition going on amongst Wednesday-Thursday dramas. Are you worried about this?
Kim Hye-soo: People had tried to stop me, saying our drama would be up against KBS TV series “The Fugitive Plan B.” (laugh) But well, I don't know. And a drama doesn't get well-received by everyone by us simply doing a good job. But no matter what the outcome is, I felt that I would not feel a single inch of regret.
Hwang Shin-hye: I watched SBS TV series “Daemul - Big Thing” very briefly while taking a break from filming our drama. It was fun.
Sin: It sounds like you're worried about “Daemul - Big Thing.” But I think the story to our drama is much more interesting.
Hwang Shin-hye: Are you really not worried about it at all?
Sin: I told you, I'm not. (laugh) But “The Fugitive Plan B” is a bit fun. (crowd laughs)

"Kim Hye-soo will "not feel inch of regret" over "Home Sweet Home" "
by HanCinema is licensed under a Creative Commons Attribution-Share Alike 3.0 Unported License.
Based on a work from this source