Kim Hyun-joong seen out and about on National Duty 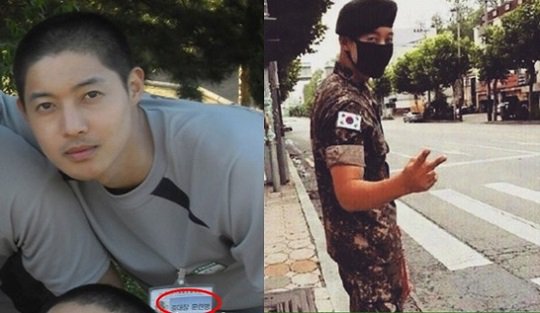 While Kim Hyun-joong claimed that the legal suit between himself and his ex-girlfriend has been a time of pain, pictures of him during his National Service came up online.

Kim Hyun-joong will be discharged from base on the 11th of February.

Pictures of when he was at Recruit training squadron of Army Division 30 show him with his fellow trainees and on his chest it says 'squadron leader trainee'.

In July last year, a picture of Kim was posted saying he was spotted in Seoul and not on base.

He is wearing a mask and holding up a V.

Many claimed that he might have been attending Bae Yong-joon and Park Soo-jin's wedding but his management explained that he was out with senior officers and that he made it back to base on the day of.

Kim Hyun-joong has been sending his words via letters from base regarding the legal suit with his ex-girlfriend.

Meanwhile, Kim stated that he had a rough time through his official homepage on the 24th.

Kim Hyun-joong had written, "As I look back on this long time, I realize I was a weakling. However, thanks to those who believe in me, I was able to make it and I am thankful for every day".

"Kim Hyun-joong seen out and about on National Duty "
by HanCinema is licensed under a Creative Commons Attribution-Share Alike 3.0 Unported License.
Based on a work from this source