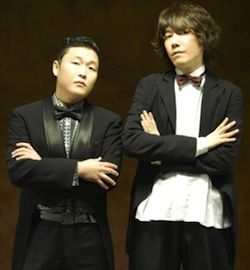 Popular singers Kim Jang-hoon and Psy will "re-hold" their Jan. 5 joint concerts in Anyang, Gyeonggi Province as the quality of their performances was faulty due to stage equipment malfunctions.

They will hold another concert in a gymnasium in Anyang for all audience members who came to the original performance that was marred by glitches from a crane used for the concert, officials from the show's management firm said.

During the concert, Kim and Psy promised the audience that they would hold another free show for them.

About 80 percent of the audience members who went to the concert have exchanged their old tickets for new ones. The concert is scheduled for Jan. 17.

"Kim Jang-hoon and Psy 'Recall' Faulty Concerts"
by HanCinema is licensed under a Creative Commons Attribution-Share Alike 3.0 Unported License.
Based on a work from this source