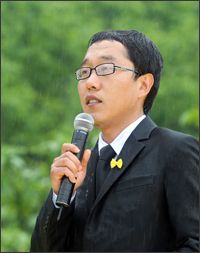 Comedian Kim Je-dong will not go ahead with his eponymous talk show on a cable television network, Yonhap News reported Wednesday.

Kim recorded the first episode of the show on April 21. It was due to air on May 6. The comedian's agency said that the cable TV company Mnet delayed the premiere, after learning that Kim was to host the one-year anniversary memorial service for the late former President Roh Moo-hyun, at the end of April.

Mnet had asked the comedian's agency to reconsider Kim's role as host of the service but when it refused, the cable company delayed the airing, citing rescheduling programs for June as the reason.

Mnet was quoted as saying that the broadcast of the comedian's talk show was postponed due to the sinking of the Cheonan navy vessel and that the show is included in the June programming. "The talk show is slated for airing in June and so we are surprised by Kim's decision (to discontinue the talk show)".

Last year Kim quit hosting a popular entertainment program on state-run network KBS, among rumors were that he was pushed out for his political stance.

"Kim Je-dong show halted"
by HanCinema is licensed under a Creative Commons Attribution-Share Alike 3.0 Unported License.
Based on a work from this source