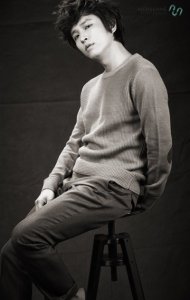 Kim Jeong-hoon, who decided to stop his studies at Seoul National University Dental School to become an entertainer, is putting on the white gown after all. The new SBS Wednesday Thursday drama 'Manyeo Yuhui' ("A Witch in Love"), will be broadcasted, starring Kim Jeong-hoon as a thoracic and cardiovascular surgeon.

Kim Jeong-hoon entered Seoul National University Dental School in 1998, but withdrew from the university in 2003 after finishing 4 semesters to pursue a career as a singer/actor full-time. He declared several leave of absences as a registered student while he was a member of the popular music group UN with Choi Jung-won-I.

After his singing career with UN, Kim Jeong-hoon transferred to Chung-ang University College of Arts as a third-year student of the Department of Theater, during which he was suddenly cast for a part in the drama 'Goong (Princess Hours)' which is based on a comic book he had enjoyed reading. Therefore it was not a hard decision to make; Kim Jeong-hoon soon agreed to participate in the drama, which became his first serious role as an actor. Kim Jeong-hoon previously appeared in the movies 'DMZ', 'Kkabulgima' ("None of Your Cheek"), etc. However, as he recalled his acting experience prior to the drama 'Goong" ("Princess Hours") he revealed, "Back then I didn't feel like I was acting, but rather that I was faithfully fulfilling my daily schedule. It was the drama 'Goong' ("Princess Hours") which made me realize that gave me more of a desire to become an actor. I knew then that I must follow my heart".

In the upcoming drama 'Manyeo Yuhui' ("A Witch in Love"), Kim Jeong-hoon plays a thoracic and cardiovascular surgeon who is rivals with Jae-Hee. They both try and in the heart of Han Ga-in. His character Yu Jun-Ha, is the female character Ma Yu-Hui's (played by Han Ga-in) first love. Yu Jun-Ha is a cold-hearted character who is capable of betraying his most precious love for success.

Though Yu Jun-Ha is an ambitious two-faced character, he is a Bad Guy in the sense that his weakness stems from his strong desire for success. In order to play this character role, he is working out to tone down his soft gentle image 2 hours everyday to build a more muscular physique. He is also dieting to make his face look slimmer for a sharper, masculine image. Kim Jeong-hoon is trying in everyway possible to get ready for this new transformation of playing a 'bad boy' character, and with all his efforts his fans are looking forward to seeing not only his acting, but this new fresh image.