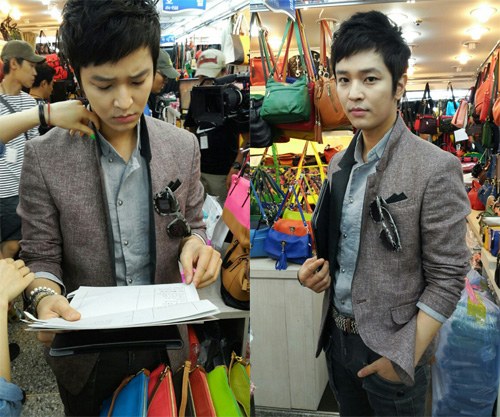 Actor Kim Jeong-hoon is finally coming back with the JTBC drama "Her Legend".

Pictures of the actor were posted online. He is either reading his script or looking at the camera in a playful manner.

Apparently he was nervous as it's his first come back in a long time. The staff and crew made him comfortable.

Kim Jeong-hoon takes on the role of brainy and royal prince, Do Jin-hoo.

"Her Legend" is directed by Lee Seung-ryeol, also another director who hasn't come out with anything for a while.

This drama is about a woman and a man who have changed fates finding the truth and preciousness of life. To be aired on the 5th of August.

"Kim Jeong-hoon films "Her Legend""
by HanCinema is licensed under a Creative Commons Attribution-Share Alike 3.0 Unported License.
Based on a work from this source