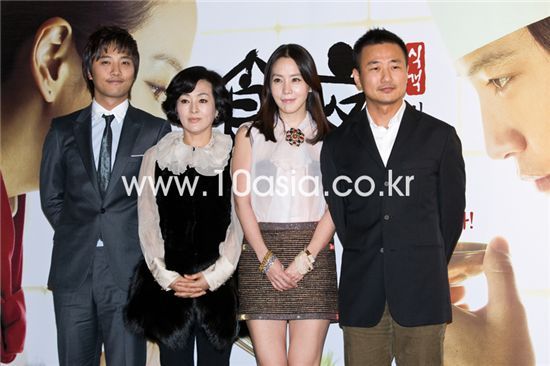 You will be desperately hungry for a steamy hot bowl of rice or ramen noodles cooked in a nickel-silver pot after watching this film. From what has been revealed at the film's press conference, held at Myung-dong Lotte Cinema on Thursday, "Le Grand Chef - Kimchi War" has succeeded in living up to its title by deliciously showing various kinds of kimchi. At a kimchi competition which aims to globalize the Korean dish called kimchi, main character Sung-chan (played by Jin Goo) and his archrival Jang-eun (played by Kim Jung-eun) present various types of kimchi. The sight of these dishes so strongly stimulates the viewers' sense of taste that they are likely to cringe when, in the film, the judges say, "What a profound, mysterious taste".

But what made the original comic series "Sikgaek" -- written by Korea's legendary artist Huh Young-man -- a masterpiece was that ultimately it used kimchi as a medium to talk about relationship between people. In "Kimchi Battle", kimchi also serves as the key to resolving misunderstandings and conflict between characters Sung-chan, Jang-eun and Soo-hyang (played by Lee Bo-hee), the lady of their former childhood residence Choonyang-gak. Will this movie which stimulates our taste bud also have a similar effect on the viewers' lachrymal glands? We will find out when the movie opens in theaters on January 28. The following are excerpts from the press conference, held immediately after the press screening attended by director Baek Dong-hoon and actors Jin Goo, Kim Jung-eun and Lee Bo-hee.

Q: You must have felt some pressure coming out with a movie titled "Le Grand Chef - Kimchi War", since it was originally a popular comic series and has been made into both a movie and a television drama.
Director Baek Dong-hoon (Baek): I did feel a lot of pressure because the movie and the drama were well received and were commercial successes. I also thought long and hard about how I should express Sung-chan's character. So I decided to tell a new story -- a story that had not been told in the comic or in the two previous projects, a story that I wanted to hear about and I came up with the past story of Sung-chan. But in terms of creating a conflict, it was my original plan to introduce a much more powerful enemy, more powerful than that of character Bong-joo in the past. That is how I came up with the female character, the genius cook Jang-eun (played by Kim Jung-eun) whom Sung-chan has never been able to beat.
Jin Goo (Jin): Frankly, I feel the pressure too. The previous projects did so well and it had been my dream to play the role of Sung-chan in a project as big as this. But when I read director Baek's script, the plot was something that had never been told before and Sung-chan was more serious and darker than I had thought so I shot the film believing that I'm the perfect actor for the part. Viewers will be seeing the most incomplete version of Sung-chan they have seen so far so I hope you see this as sort of a prequel and the process of me having gone through this process to grow into the perfect versions of Sung-chan as played by actors Kim Kang-woo and Kim Rae-won. 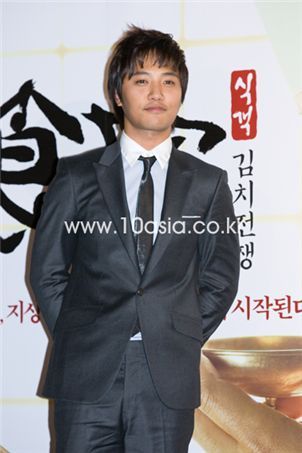 Q: It must have been hard for Kim Jung-eun as well. You have been taking on many physically demanding roles -- playing a handball player in the film "Forever the Moment" and a surgeon in MBC TV series "General Hospital 2".
Kim Jung-eun (Kim): There is a certain image about me that has solidified over the ten or so years that I have been acting and it has brought me where I am today. But from a certain point on, I felt like I was stuck in my unique image and so I thought that I had do something painful to make myself believable as an actor. That's why I felt comfort from dribbling balls and holding scalpels. Physically, it was the hardest playing handball but this role was very hard on me emotionally because Jang-eun is a lonely, painful character.

Q: You prepared kimchi battle as the new theme for "Le Grand Chef". What did you want to express through kimchi?
Baek: It is a kimchi battle but I wanted to show the emotion behind kimchi, not the battle. So I tried to compose the story of characters who could portray the various images the dish gives off. Kimchi is something that all members of the family gather around to make but the younger generation may not know that or feel that way about kimchi. So I wanted to show them that and express what an incredible emotion that is in the movie.
Kim: I have done many interviews with the media but I think this is the hardest film to promote. You understand what kind of a movie it is when you watch it, but there are parts that are hard to explain if you haven't seen the film. To be honest, we promoted food and kimchi as the main theme and kimchi does appear with a very strong impact right from the beginning. But you will feel that the story about people is bigger and more important than kimchi. Using kimchi as a medium, the movie naturally flows into a story about growth and healing so I think people are more important than kimchi in the film.

Q: In the film, the most important person concerning growth and healing is a mother. What kind of a mother figure did you want to portray?
Lee Bo-hee (Lee): I acted the part hoping that my character will move the hearts of Sung-chan and Jang-eun rather that wanting to portray a certain type of a mother. I compared my character with my own mother and I actually have been making kimchi with my mother for a couple of years now. She is old so I worry that if she dies, the kimchi won't taste the same without her taste. That is why I wanted to find my own motherly taste and I thought about that when I watched the film.

Q: The other actors must have thought about the role of mothers too.
Kim: Really, it's actually the bad cooks that try and give a go at cooking special dishes like pasta. But while shooting this film, I felt that the hardest dish to make is a home-cooked meal that our mothers make. Making a really good bean paste soup or kimchi soup is harder than anything else. That's what I learned that and I've gotten used to cooking those everyday dishes now. And I am not like Jang-eun -- I am a very good daughter. (laugh) I have never been away from my mother, not even a year. But while I was in preparations to shoot this film, I talked a lot with the director and I wondered whether I might have said something hurtful to my mother. I think I might have and I want to be good to her in the future.
Jin Goo: I think I have become a better son to my parents while working on this film. I hope the viewers will learn to think more of their parents as well. 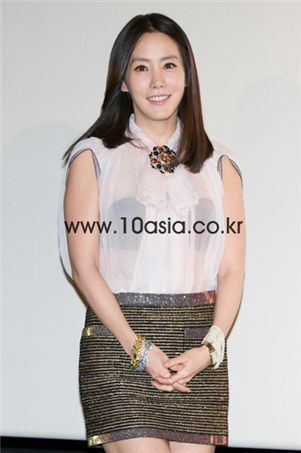 Q: But visually, what stood out the most was the different colors of the various types of kimchi. Could you recommend one type of kimchi that is the most delicious and most likely to be a universal success?
Baek: That is a hard question for me to answer because I was so busy making the film that when I came back to my senses, all the food was gone. The only kimchi that I was able to taste was the kimchi used in a scene where Lee Bo-hee is making kimchi. That was the most memorable kimchi for me. And the two kinds of fusion kimchis that Jang-eun made were newly invented ones -- the food director went to a lot of trouble to make those.
Kim: You will see it in the movie but the kimchis my character makes have such pretty decorations on them that I couldn't dare try eating them. I often just imagined of how they would taste.
Lee: The kimchi that director Baek mentioned -- it was so delicious that I ate too much of it and almost got sick. I used to wonder whether food that appear in movies taste as good as they look, but I think I made the proper Jeolla Province-style kimchi in this film.
Jin: My favorite kimchi was the one that was unveiled at the second competition. It didn't win the competition in the film but in reality, I can proudly say that it tasted the best -- a taste that was closest to being appreciated by the general public. Honestly, everyone enjoyed the kimchi because it was delicious so I thought it would be mentioned here (laugh). But nobody is bringing it up so I will. It was so good that all the staff ate a lot of kimchi. And the first kimchi introduced in the film, I left it in a certain place to take it home but the director and cinematographer took it. (laugh)