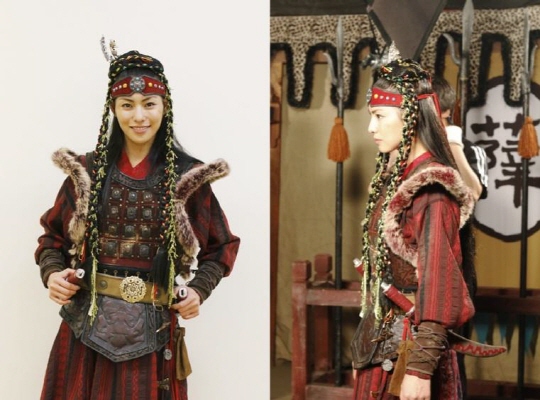 Actress Kim Jung-hwa has joined the historical drama on KBS 1TV "Gwanggaeto the Great" as a female warrior.

She finished the first shoot for the drama on the 22nd in Suwon. She is a born female warrior Seol Ji and full of charisma.

According to the staff, despite it being her first shoot, she managed to accomplish the images of a female warrior well and also was great at crying tear for her long lost and found brother.

Director Kim Jong-seon said, "Kim Jung-hwa has met a new character called a born female warrior of the field, she has been working hard and has been training for martial arts, horseback riding and acting".

"Gwanggaeto the Great" is about the reign of King Gwanggaeto who revived the Goguryeo and will be first broadcasted this 4th of June. Kim Jung-hwa's scene starts at the 11th episode.

"Kim Jung-hwa is female warrior in "Gwanggaeto the Great""
by HanCinema is licensed under a Creative Commons Attribution-Share Alike 3.0 Unported License.
Based on a work from this source