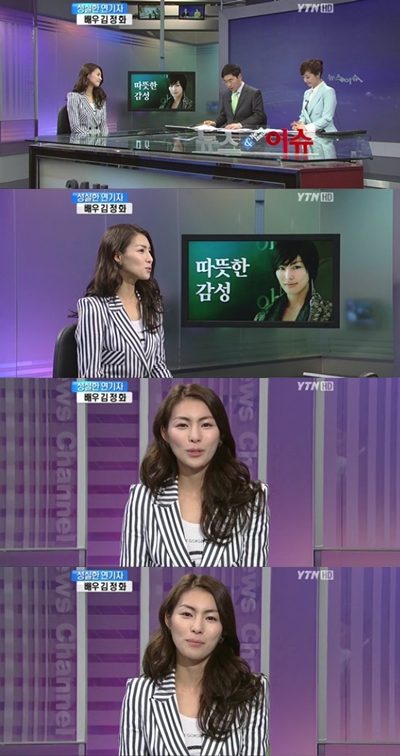 Actress Kim Jung-hwa expressed sadness for her mother who is suffering from cancer.

Kim Jung-hwa looked back on her acting life from her debut until now in YTN "News and Issue – Issue and People" on the 5th of April.

Her chance to debut into entertainment was thanks to her mother. When she was cast on the streets when she was in high school, she said, "I think I was submissive when I was young. My mom told me to go for it for experience".

However, when she was shooting the 2008 KBS 2TV drama "Land of wind" she heard the tragic news that her mother had cancer. She underwent surgery during the drama shoot.

Kim Jung-hwa then calmly said, "It recurred and she is being treated". She sent a message to her mother, saying she was going to cry and making a touching moment, "Thank you for going through the treatment so well and I will protect you".

Meanwhile, Kim Jung-hwa has been cast for the drama "Gwanggaeto the Great", a follow up of the current historical drama "King Geunchogo" on KBS 1TV.

"Kim Jung-hwa says "I will protect you" to cancer suffering mother"
by HanCinema is licensed under a Creative Commons Attribution-Share Alike 3.0 Unported License.
Based on a work from this source