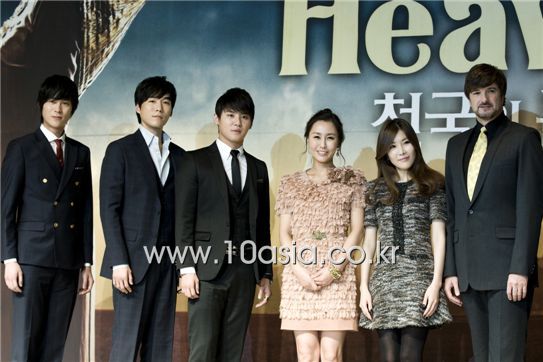 Love that bloomed during the Vietnam War in 1967 in musical “Miss Saigon” has arrived in the upcoming “Tears of Heaven.” The new production derived from singer Jo Sung-mo's music video for song “Do You Know” (2000), is about the love triangle between Korean soldier Jun (Kim Junsu, Jung Sang-yoon, Jeon Dong-seok) dispatched to Vietnam, female singer Lyn (Yoon Gong-joo, Lee Hye-i), and American Colonel Grayson (Brad Little). In September of 2009, Seol & Company CEO Seol Do-yoon had declared the production “cannot be produced in Korea since our goal is to go to Broadway.” And a year later, “Tears of Heaven” really came to be produced by a creative team who “has worked on-Broadway before.” Frank Wildhorn of “Jekyll & Hyde” will compose the songs, Gabriel Barre of “Memphis” which swept four awards at this year's 64th Tony Awards will direct and David Gallo will take charge of the stage's design. First and secondary readings for the script took place in New York a year ago and the English version of the soundtrack has been completed. And the idea for the musical may have come from Korea with its producer also being Korean, but the show, set to run at the Main Hall 'Hae' of The National Theater of Korea from February 1 to March 19 of next year, will show in the format of a licensed production with English lines and the lyrics for the songs translated. Judgement into whether the show is a success or a failure and how well it was produced will come when the show raises its curtains but until then, the interview below will quench your initial thirst regarding “Tears of Heaven.” 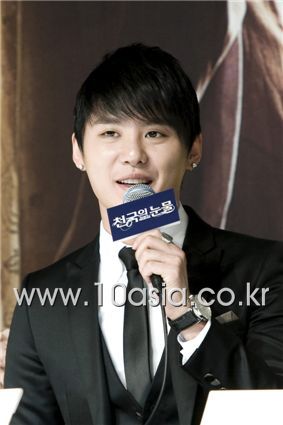 Kim Junsu speaks at a press conference for musical "Tears of Heaven" held at the Imperial Palace hotel in Seoul, South Korea on December 13, 2010. [Lee Jin-hyuk/10Asia]

Q: It seems like it'll be inevitable that “Tears of Heaven” will be compared to “Miss Saigon” because both are set during the Vietnam War and are about the love between a Vietnamese woman and a dispatched soldier.
Seol Do-yoon:
If you think the two are similar because they're set during the same time period, it would be the same for “Les Miserables” which is about the French Revolution or the “Phantom of the Opera” about the Opera House in Paris. That's why I had asked our creative team from overseas, including Frank Wildhorn, about whether they had watched “Miss Saigon.” But the only similarity is that the setting is the Vietnam War. If you must compare the two, “Miss Saigon” told more about the Bui Doi or social phenomenon such as the 'American Dream' while “Tears of Heaven” is focused on love. And while “Miss Saigon” starts off with the actual photograph of the Vietnamese woman parting with her child at the airport, we start off with Jo Sung-mo's music video for “Do You Know.” We held two workshops in New York with our producer there, officials related to the theater and several experts but not once did they say it's similar to “Miss Saigon.”

Q: The fact that you cast Kim Junsu is definitely eye-catching. For what reason was this and what process did he go through to get the part?
Seol Do-yoon:
Kim Junsu went through a private audition for his role, just like the rest of the cast. Of course we thought of how his casting would affect the production in terms of success but his capability as a musical actor had already been verified through “Mozart!” I felt that he was the right one for his role and the majority of creative teams overseas agreed to it as well.
Kim Junsu: I'm here today as a musical actor although I feel a bit ashamed to call myself one. This will be my second musical after “Mozart!” and unlike the previous production, “Tears of Heaven” will focus more and love along with elements of betrayal and conflict. And I personally think music is most important to a musical but Frank Wildhorn's music was different from that of “Mozart!” --classical but containing a lot of pop music-like elements so I feel like that's what I could do a good job of bringing out. It's true that I'm very nervous as well but I'd like to enjoy the situation I'm in with the audience. 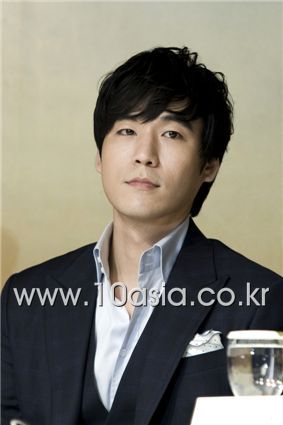 Q: You did “Mozart!” but you must feel a lot of pressure in terms of the acting since you're originally a singer.
Kim Junsu:
The pressure applies to singing as well. I went through a lot of trial and error while doing “Mozart!” because singing pop music is different from singing in a musical. There are differences in terms of vocalizing and how you weave in your emotions into your singing, although both are based on the same form of language that we call singing. And a lot of people are worried about my acting. All I can say for now is that I'll work hard and improve on it so that I'll become a better musical actor.

Q: There was controversy a few days ago over how much actor Cho Seung-woo receives for each show he stars in for musical “Jekyll & Hyde.” How much Kim Junsu made through “Mozart!” got revealed at the time as well. How much will he get for “Tears of Heaven”?
Seol:
How much or how less one receives as a guarantee fee compared to someone else isn't important because there isn't a definite criteria -- it'll depend on a variety of factors including the number of shows or the size of the theater. But if I may say so officially, Kim Junsu is taking part in “Tears of Heaven” with no guaranteed fee. The agency he is with invested in the production so he'll be given a certain share of the production's stake when it starts making profits. 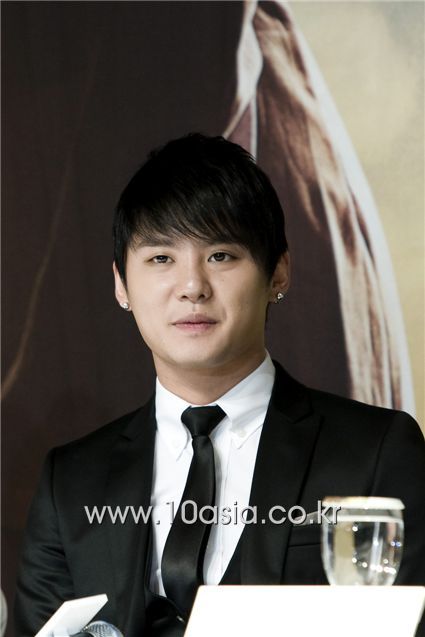 Kim Junsu attends a press conference for musical "Tears of Heaven" held at the Imperial Palace hotel in Seoul, South Korea on December 13, 2010.

"Kim Junsu stars in 2nd musical "Tears of Heaven" - Part 1"
by HanCinema is licensed under a Creative Commons Attribution-Share Alike 3.0 Unported License.
Based on a work from this source