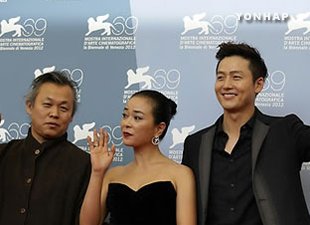 Investing distributor for the movie NEW said on Saturday that the movie had claimed the award at an awards ceremony held at Hotel Excelsior in Lido island, Venice.

Kim said it was an honor to win an award again at the festival. He received an award from the festival for his movie, "3-Iron", eight years ago. He added the Young Critics Award is an award that is meaningful and honoring for both presenter and recipient.

The Young Critics Award is given after a vote by young moviegoers from 18 to 19 years of age. It is organized by the Italian education ministry, awarded prior to the main awards before the closing of the festival.

"Kim Ki-duk's "Pieta" Wins Young Critics Award in Venice"
by HanCinema is licensed under a Creative Commons Attribution-Share Alike 3.0 Unported License.
Based on a work from this source