Kim Min-hee Anything But 'Helpless' in New Movie Role 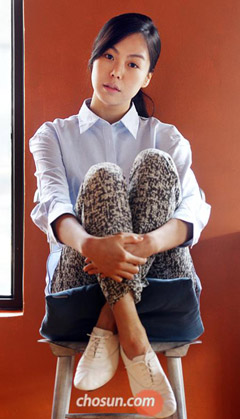 Actress Kim Min-hee, who stars in the film "Helpless", which is scheduled to be released next Thursday, fell in love with the movie as soon as she read the script.

"I love films about characters with checkered lives, so I thought this role would give me a chance to show what I am capable of as an actress because it fits my style", she said. Not that portraying a character with a complicated life story is an easy task. "The key was being able to express the detailed emotions the protagonist was going through, so I needed to be really focused and communicate my ideas clearly to the director Byeon Yeong-joo", she said.

"From the outset, the director told me, 'Your face is very expressive and it tells many stories'. I took in what she said and tried hard to show my full potential. Her pep talk really helped".

From when did she begin to think of herself as an actress? "I started to feel that acting was my true calling when I was 24. At the time, I was working on a TV drama called 'Goodbye Solo'. Until that point, I wasn't sure what I wanted to do with the rest of my life", she said.

Does she feel that the acting profession has changed her? "I don't think of myself as having changed much, even though my face, fashion sense or acting skills have been in the spotlight at certain times. But I know that I feel differently about acting now. I often feel a tremendous sense of achievement and really enjoy doing this job".

She said it can be hurtful to feel the ire of critics and audiences, and that it is necessary to develop a thick skin as an actress because it is not possible to please everyone. "I listen to those who appreciate my talents and I try to turn a deaf ear to people who make negative comments about me", said Kim. "I often write down my feelings and thoughts, and sometimes I cry, which helps me purge all of those negative emotions.

"But I don't share my secrets with others. If I do, then I start to worry that maybe I have given too much of myself away, and that could somehow come back to haunt me later".

"Kim Min-hee Anything But 'Helpless' in New Movie Role"
by HanCinema is licensed under a Creative Commons Attribution-Share Alike 3.0 Unported License.
Based on a work from this source