Kim Min-hee VS Han Ga-in, a competition on movie screens 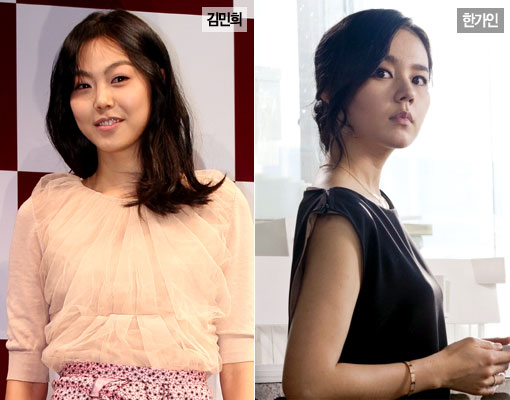 "Gabi" and "Architecture 101" to compete in March.

The two 31 year-old actresses will face off through their acting.

Both born in 1982, Kim Min-hee and Han Ga-in will compete in theaters this coming March with their respective movies. They both have attempted at changing their images through these movies.

Kim Min-hee has taken on the role of Seon-yeong, who becomes wrapped up in a murder case in the movie "Gabi", which is being released on the 8th of March. The movie poster, featuring her topless, was a big issue when it first came out. At the press preview of the movie that was held on February 7th she said, "I am trying out this kind of character for the first time in 12 years but there was no reason to hesitate. The half-naked picture in the poster is also a way of expressing the character so I took pictures without thinking".

Han Ga-in is also looking to leap on screen. She has expressed her thirst for acting by saying she wanted to make a movie that represented her. She means to make it happen in the MBC drama "The Sun and the Moon" and the movie "Architecture 101". She will appear as mature woman Seo-yeon, who has been divorced and has pain in her heart.

"Kim Min-hee VS Han Ga-in, a competition on movie screens"
by HanCinema is licensed under a Creative Commons Attribution-Share Alike 3.0 Unported License.
Based on a work from this source