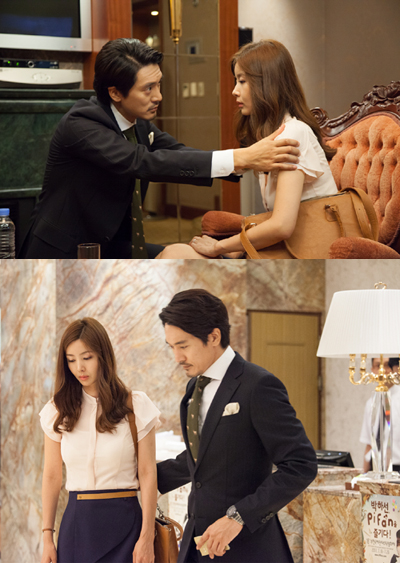 On the eighth episode of the JTBC mini series "Beloved", Chan-joo (Park Sol-mi) can't control her feelings and leans on her ex-lover Eun-hyeok (Kim Min-joon) after witnessing her husband Jin-se's (Hong Jong-hyun) affair.

Chan-joo was brutally dumped by Eun-hyeok 3 years ago about she weakened at the sight of him wanting her back.

These paparazzi still cuts are taken by the people who are watching him as he takes Chan-joo to his Residence Room at a hotel. These pictures will later make Chan-joo fall into a bottomless pit.

Out of despair seeing her husband with another woman, Chan-joo resents Eun-hyeok telling him, "Everything went wrong since 3 years ago when you left me" and he tells her "You can turn it back so come back to me". The two then fall into fierce emotions.

However, thinking about her husband, Chan-joo pushed Eun-hyeok away and ran out but Jin-se heard that they were together. The couple have a fight and Chan-joo asks to separate from him, not able to accept the situation.

It seems that Jin-se and Chan-joo who seemed so affectionate about each other at first feel changes in their feelings for each other as other people get involved with their relationship.

The eighth episode of the JTBC drama "Beloved" can be seen on the 12th at 8:45PM.

"Kim Min-joon and Park Sol-mi in a hotel at night"
by HanCinema is licensed under a Creative Commons Attribution-Share Alike 3.0 Unported License.
Based on a work from this source