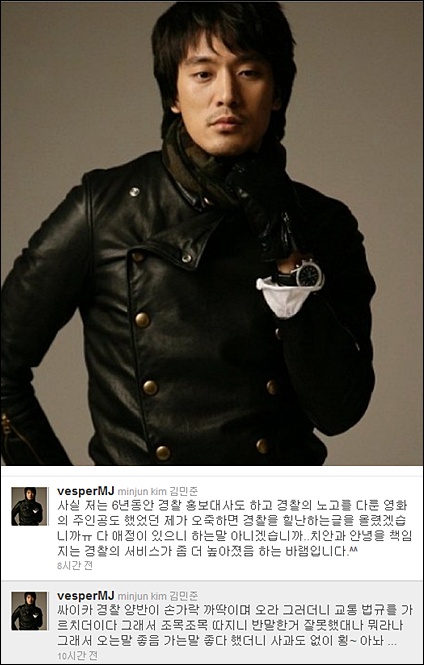 Actor Kim Min-joon spoke about his discomfort with the traffic police.

On the 17th, Kim Min-joon wrote on his Twitter, "A motorcycle bike cop fingered at me to come over then he starts teaching me the traffic rules. As I questioned him he said I was wrong to speak impolitely so I said claw me and I'll claw thee. Then he just went off without an apology".

As the netizens voice out, "Are you resisting authority?" and "Aren't you over expanding a single person's problem?" he explained, "Why would I put up such writing. It comes from affection. I just hope the service of the police who is responsible for our safety gets better".

Those who have seen this support Kim Min-joon and say, "Good riddance", "I'm glad there was no other reaction and he held it in", "It's so brave for a celebrity to openly criticize authority", "I feel deep advice" and more.

Meanwhile, Kim Min-joon had been appointed as the promotional ambassador for the police.

"Kim Min-joon, tells traffic police a hard truth "Hopefully the police service gets better""
by HanCinema is licensed under a Creative Commons Attribution-Share Alike 3.0 Unported License.
Based on a work from this source