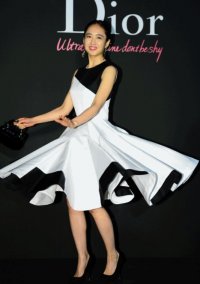 Kim Min-jung's injury could jeopardize her appearance as the lead actress in the TV soap "Hero - Drama", which is due to air Nov. 9 on MBC, Yonhap News reported Monday.

According to a staff member of the television series, Kim said she was considering leaving the cast.

"Kim felt responsible for the show and was determined to do whatever it would take to act, but her recovery rate is very slow and she is in a great deal of pain, and is facing a major dilemma", Kim's management agency was quoted as saying.

The makers of the TV series held a meeting over the weekend but have yet to reach a final decision.

"It's quite the predicament with the program slated to air in less than a week, but we're afraid of even bigger damages if we carry on shooting", said Kim's representative.

The 27-year-old was diagnosed early last month with calcific tendinitis, a condition characterized by crystalline calcium phosphate deposits on the tendons, which causes pain and inflammation, in her right arm. She reportedly is unable to use it.

The actress suffered the injury while shooting the baseball melodrama "Strike Love" in April, but chose to neglect it and went on to train at an action school for the upcoming show, aggravating her condition. She was unable to attend the press conference for "Hero - Drama" that took place on Oct. 23.

About 30 percent of her tendon is damaged and half of the crystalline calcium phosphate deposits remain, and her arm is very swollen, said the agency.

She is currently receiving laser therapy since surgery would leave a scar. "They said she would recover after four or five sessions but there hasn't been much improvement after three. We're squeezing in one more session for the shoot, but we will have to wait and see if there are any good results", said the agency.

"Hero - Drama" is about Jin Do-hyeok, a reporter for a third-rate paper (to be played by Lee Joon-gi), trying to make it big in the news world. Kim is supposed to play the role of a tough police officer who becomes romantically involved with Jin Do-hyeok. It's a role that requires action sequences.

"Kim Min-jung's Role on TV Soap in Jeopardy"
by HanCinema is licensed under a Creative Commons Attribution-Share Alike 3.0 Unported License.
Based on a work from this source