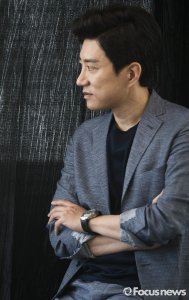 Actor Kim Myung-min, star of the hit drama "Beethoven Virus", has been cast in the lead role of the upcoming melodrama "Closer to Heaven".

Kim will play the challenging role of a man suffering from Lou Gehrig's disease who still maintains a sense of humor. He will appear alongside actress Ha Ji-won, who will play a cheerful funeral director.

"Closer to Heaven" is expected to be a romantic tearjerker. The film's director will be Park Jin-pyo, who directed the award-winning film "You are my Sunshine" and "Voice of a Murderer".

Shooting for the film will begin early next year. It is tentatively scheduled to be released in the fall of 2009.

Kim's popularity has skyrocketed this year with his role as Maestro Kang, a gifted conductor, in the MBC drama about classical musicians "Beethoven Virus". He recently won the top acting prize at the 2008 Korea Drama Festival.

Hallyu star kwon Sang-woo was initially reported to have been cast in the lead role for the film. However, Kwon dropped out of the project last October, causing production to be delayed.