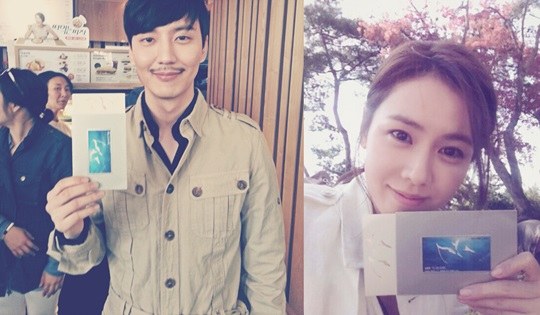 The Shark Supporters NFC Cards are functional cards for the fans. Just by touching a cell phone with this card, various "Shark" information and videos on the making can be seen right away. "Shark" supporters can receive any contents about the movie firsthand.

In celebration of the cards, Kim Nam-gil and Son Ye-jin are smiling with their cards in their hands. They have already left messages and welcome notes on the drama café.

The production claims these cards were made to communicate better with the fans. The cards have been sent out since the 6th of May. Those who haven't had the chance to sign up for the cards will be able to see the contents of it on the internet café after they've been revealed to the supporters..

KBS 2TV drama "Shark" is about a man who points a knife at the woman he loves and a woman who becomes weak at the feet of love. The cast include, Kim Nam-gil, Son Ye-jin, Ha Seok-jin, Lee Hanee and more. To be aired on the 27th of May.