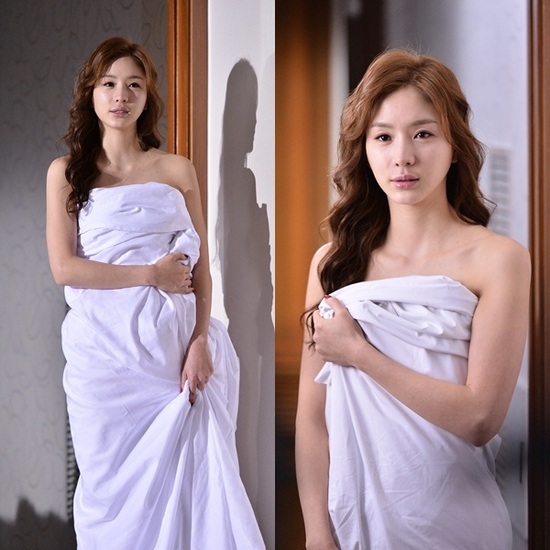 Actress Kim Sa-hee was scene with just the bed sheets around her in an episode of the JTBC drama "Thorn Flower".

Ji-min (Kim Sa-hee) is looking at Je-joon (Choi Woo-suk) who is Se-mi's (Jang Shin-young) boyfriend. She is the daughter of a wealthy family who thinks of herself as a princess and has a strong ego but feels jealous of Se-mi, the caretaker's daughter.

When Se-mi is in trouble because of her brother Hyeok-min (Kang Kyung-joon) and his friend Seo Won (Lee Won-suk-I), Ji-min refuses to help her and even steals away Se-mi's boyfriend Je-joon.

Ji-min tries to attract Je-joon who is drunk in sorrow because of Se-mi, into bed and make him hers. She uses whatever power she has to do what she has to do in order to get what she wants.

She is one of the characters Se-mi decides to take revenge on and is responsible for a certain weight of the drama.

Meanwhile, "Thorn Flower" is about a pure woman who is stomped to the ground before she gets up to take revenge on the people who made her miserable. To be aired on the 4th of February at 8:10PM.

"Kim Sa-hee wrapped in bed sheets"
by HanCinema is licensed under a Creative Commons Attribution-Share Alike 3.0 Unported License.
Based on a work from this source