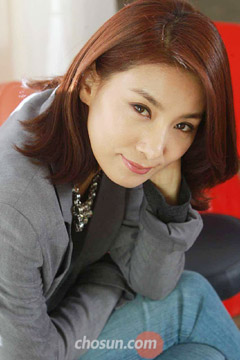 Kim Seo-hyung says she is not uncomfortable playing villainous characters on TV because there are many faces of evil and each one forces her to stretch herself as an actress.

The 39-year-old won over fans and critics alike with her portrayal of an evil woman who conspires to kill her boss and take over his company in the SBS drama "Salaryman", which went off the air on March 13.

"I just decided that if I play an evil character 100 times, I will play differently every time", she said in an interview with the Chosun Ilbo last Thursday. "I just work hard because you never know when another opportunity will come your way".

Kim became an actress at the age of 21, but she did not gain full public recognition for almost another decade.

"I had dreamed of being an actress since I was in elementary school. I didn't want to do anything except act", she said. "So I took any role that came my way. Even when I didn't get any work, I never entertained the idea of quitting. I decided to stick at it no matter how long it took to become recognized as an actress".

"I was even told that I am hard to cast because I was getting stereotyped to play villainous roles, so I became frustrated and upset", she said. "But this job requires a lot of patience, and after a while I relaxed and realized you can't rush to the top of the hill".

"I intend to be acting a long time and to keep improving, slowly and steadily. In the meantime, I will keep my unique style and eventually the roles I want will come along. I will never stop until I achieve my goal".

"Kim Seo-hyung Prepared to Play Villain While Biding Time"
by HanCinema is licensed under a Creative Commons Attribution-Share Alike 3.0 Unported License.
Based on a work from this source