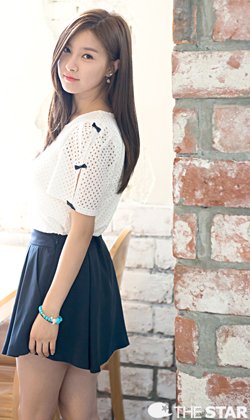 Kim So-eun is expanding her horizons as an actress with her first starring role in a film. She plays a ghost girl who forms a friendship with a boy who can see ghosts in the horror film "Mourning Grave", which was released last week.

"I felt a bit afraid about taking the role at first, but I was happy to finally have a chance to appear on the big screen after all those years in television dramas", Kim said.

She previously had only minor roles in films about a decade ago, when she first entered showbiz as a high schooler.

Her co-star in the film was Kang Ha-neul, with whom she has been close friends since university. Their closeness helped Kim portray the deep feelings and emotions that her character feels, she said.

"Since I worked with a very good friend, I felt more comfortable", she said. "I'm really grateful for that".

Filming took place over a month and a half during a bone-chilling winter in Gangwon Province, but she said the situation helped unite the entire team and thus enjoy the shoot.

"I'd like to continue doing what I love doing, what I enjoy doing and what I'm good at while slowly and steadily expanding my repertoire", Kim explained. She hopes to appear as a villain in an action flick in the near future.

"Kim So-eun Talks About First Starring Role in Film"
by HanCinema is licensed under a Creative Commons Attribution-Share Alike 3.0 Unported License.
Based on a work from this source