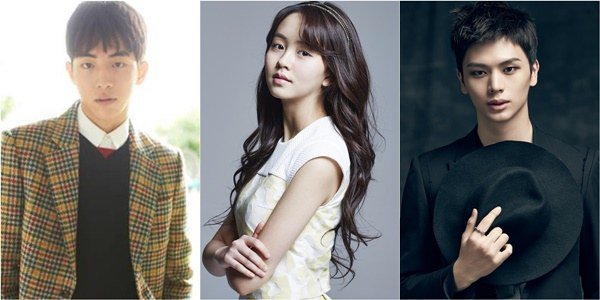 Kim So-hyun, Nam Joo-hyuk and Yook Sung-jae are starring in the sixth 'school' series drama on KBS 2TV. They have been selected as the leading cast of "Who Are You - School 2015".

Kim So-hyun who plays Lee Eun-bi, a goddess in Sekang High School when she was a loner in her previous school, Nam Joo-hyuk a good looking rising star and Yook Sung-jae a handsome one, have come together to complete the story.

Nam Joo-hyuk plays Han Ian, a good looking Sekang High School student who is a hero in the swim team. He looks cold and uncaring but actually he's very warm and considerate on the inside. Yook Sung-jae is the time bomb of the school named Gong Tae-gwan, and there's no knowing what he might do next.

The three of them are leading stars of the sixth episode of the 'School' series. Kim So-hyun is actually 17-years-old and the other two have just entered their 20s.

"Who Are You - School 2015" is about the reality students today face. The previous series so far has created top stars like Jo In-sung, Jang Hyuk, Ha Ji-won, Lim Soo-jung, Lee Jong-suk, Kim Woo-bin and more.

"Kim So-hyun, Nam Joo-hyuk and Yook Sung-jae to star in "Who Are You - School 2015""
by HanCinema is licensed under a Creative Commons Attribution-Share Alike 3.0 Unported License.
Based on a work from this source