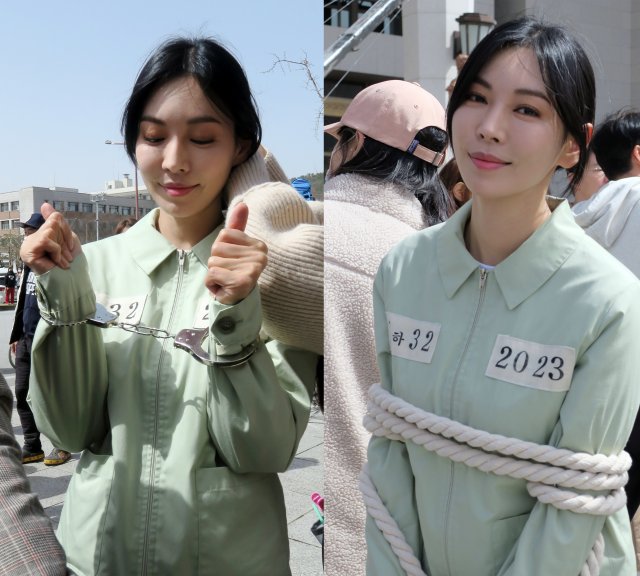 Kim So-yeon's agency, J-Wide Company, released the behind-the-scenes of Kim So-yeon's last filming site for viewers who are disappointed after the end of "The Penthouse 2".

On the 2nd, Kim So-yeon received a lot of public love for her performance as much as "The Penthouse" in SBS' Friday-Saturday drama "The Penthouse 2". As a result, a still showing Kim So-yeon's lovely appearance, which is 180 degrees different from Cheon Seo-jin, was released, drawing attention.

Kim So-yeon in the still, wearing handcuffs on both hands and staring at handcuffs with a playful expression and smile rather than looking uncomfortable, is looking at the camera with her arms tied to a rope, looking lovely. Kim So-yeon, who acts as a 'human vitamin' in the field with her unique smile, captivates those who see her as a different charm from the drama.

Kim So-yeon received positive reviews for creating a great scene in each episode with her solid acting skills and emotions in "The Penthouse 2" following "The Penthouse". From tight tension to desperate motherhood, the drama was completed with extreme immersion. In "The Penthouse 3", attention is drawn to how Kim So-yeon will entertain viewers.

"Kim So-yeon of "The Penthouse 2" Increases Anticipation for "The Penthouse 3""
by HanCinema is licensed under a Creative Commons Attribution-Share Alike 3.0 Unported License.
Based on a work from this source