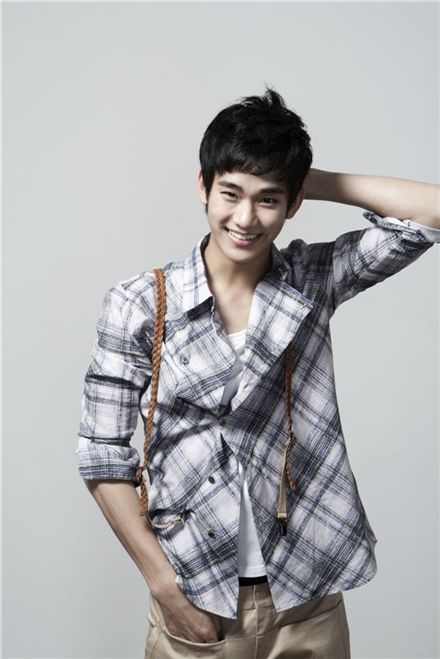 A press release from KEYEAST on Monday announced that Kim will be playing the role of Song Sam-dong in the show, a guy who dreamed of owning his own farm but later decides to go a performing arts school after falling head over heels in love with Go Hae-mi.

"Dream High", about the dreams of students who attend a performing arts school with the storyline relayed through song and dance, is also being produced by cable unit CJ Media.

Hallyu star Bae Yong-joon, KEYEAST's major shareholder, will take part in the planning and production process of the show, while founder and CEO of JYPE, Park Jin-young, will arrange and produce the music and choreography for the musical numbers.

The musical series, which has yet to confirm other members of its cast, is scheduled to air starting January 3 next year.

Kim made his debut on the screen with a role in MBC's sitcom "Kimchi Cheese Smile" in 2008. He appeared in musicals "Grease" and "A Midsummer Night's Dream" in 2003 and played the younger version of Go Soo's character in SBS' "Will It Snow for Christmas??" last year.

He also starred in the SBS special drama "Father's House" alongside veteran actor Choi Min-soo and most recently played the young Lee Sung-moo in the hit SBS series "Giant".

"Kim Soo-hyun cast as male lead in upcoming KBS drama"
by HanCinema is licensed under a Creative Commons Attribution-Share Alike 3.0 Unported License.
Based on a work from this source