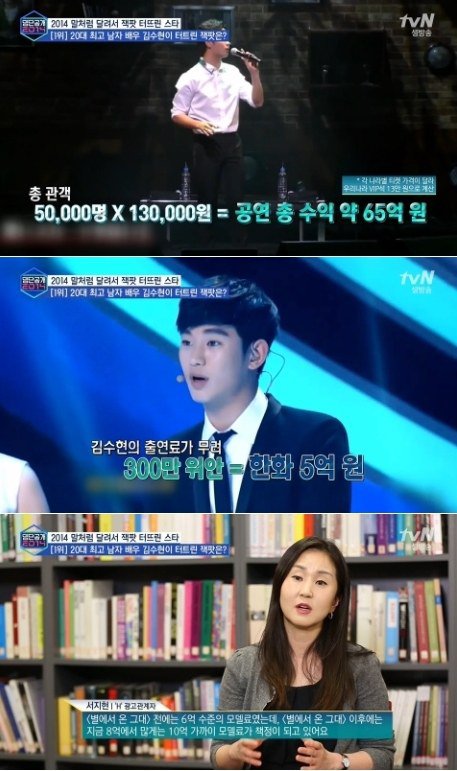 Kim Soo-hyun is the star with the most income this year.

He came in first as the 'star who hit the jackpot'.

Kim Soo-hyun has become the Prince of Asia since his success in the drama "My Love from the Star".

His fan meeting was held in Seoul and 9 other Asian cities in 7 Asian countries. He's had 9 concerts so far which gathered 50,000 million fans, adding 6.5 million won to the total.

Kim Soo-hyun was paid 500 million won for appearing in a popular Chinese TV show and was even offered a private jet. He's filmed more than 30 Chinese advertisements which added up to 90 billion won.

Kim Soo-hyun's modeling price was 600 million before he starred in the popular drama that brought up his fame and now he's worth 800 million ~ 1 billion won. Advertisements in Korea alone are more than 15 which equals to 1 billion and above.

"Kim Soo-hyun earns most money this year with 100 billion won"
by HanCinema is licensed under a Creative Commons Attribution-Share Alike 3.0 Unported License.
Based on a work from this source