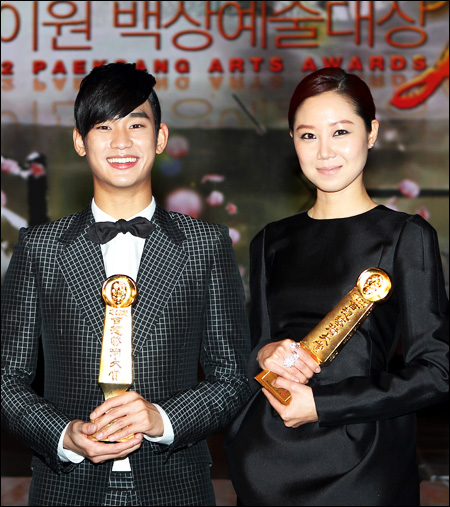 Actor Kim Soo-hyun, left, and actress Gong Hyo-jin pose for a photo after winning the Best Actor and Actress for television award at the 48th Paeksang Arts Awards at Olympic Hall in eastern Seoul, Thursday. / Yonhap

Kim played the role of a gentle yet passionate king on the MBC drama "The Sun and the Moon" earlier this year and was praised for his delicate portrayal of the fictional rular of the Joseon Kingdom (1392-1910).

He was the youngest and newest among the candidates, but he beat heavyweight contenders including Han Seok-gyu from "Deep-rooted Tree", Shin Ha-kyun of "Brain" and Cha Seung-won from "The Greatest Love".

"I am very grateful for this moment, but I am ashamed as well. It's like getting a lot of homework. I'll do even better in the future", he said after receiving the trophy.

The Grand Prize for Television went to SBS "Deep-rooted Tree" and actress Gong Hyo-jin won the Best Actress award for her appearance in "The Greatest Love".

"Kim Soo-hyun wins Paeksang awards"
by HanCinema is licensed under a Creative Commons Attribution-Share Alike 3.0 Unported License.
Based on a work from this source