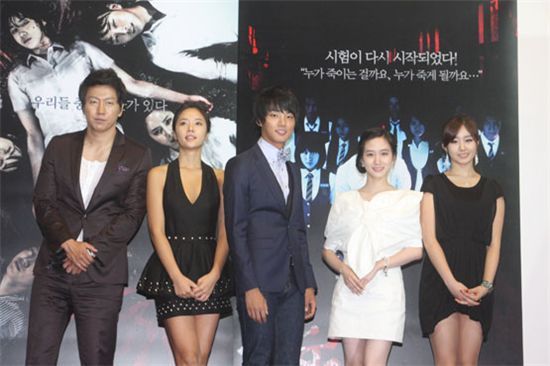 In the summer of 2008, the film "Death Bell", about a group of grade-obsessed students who must get the right answers in order to avoid mysterious death, succeeded in attracting 1.8 million viewers by telling a story related to the country's overly competitive college entrance phenomenon. The film's sequel "Death Bell 2: Bloody Camp" also deals with the survival game on the whole but, unlike the original film, it does not provide any clues beforehand nor the order of deaths, making the story unfold in a more cutthroat and cruel way. However, in terms of the film's characters, director Yoo Seon-dong's "more speedy and detailed direction than the first film" did not wield its strength to a full degree. The features various characters including a student suffering from an obsessive-compulsive disorder to get good grades, a swimmer, a hip-hop mania and a precocious young girl. But it is disappointing how each character was not believable enough and was counterproductive to the film. Below is the interview from the press conference after the screening of the film "Death Bell 2: Bloody Camp". The film opens in Korea on July 28.

Q: What was your strongest focus in directing the sequel pic "Death Bell 2: Bloody Camp"?
Director Yoo Seon-dong (Yoo): I tried to make the direction more speedy and detailed while absorbing the strengths of the first film. If the original pic focused on the examinations, this movie puts more focus on the physical space that is a school. Authoritative teachers like Teacher Kang (played by Kim Byung-ok) and Teacher Cha (played by Kim Soo-ro) or the competition and violence between the students were things that I saw and felt when I was in school. I tried to put such horrifying elements into the film.

Q: The set-up of solving problems is the same, but the format of problems appears to have changed a bit.
Yoo: When we writing the script, there were suggestions that we should make the characters solve the problems in a quiz show format, like in the first movie. But I thought it would just be an imitation. If the first film was like the college entrance test, you could say that this one is like an essay exam. It is not important whether you get one right answer. I want this film to be a movie that makes the viewer go to school, look for answers as to who kills whom, who dies, how he dies and why.

Q: There is a scene where several students are having a sexual conversation and then rapes a friend. The character development felt somewhat contrived in such scene.
Yoo: I tried to place various characters in the film that would have existed in one's school days. If it felt contrives, I think it was due to the lack of my abilities. But when I was in school, there were some students who clearly drank alcohol and did things similar to rape.

Q: Actors like Kim Soo-ro, Jiyeon, Hwang Jung-eum and Yoon Si-yoon have usually played bright characters up till now. How did come to casting them as lead actors in a horror film?
Yoo: I thought that if their existing images can change in the film, it would be a scarier stimulation for viewers. In the case of Kim Soo-ro, he has often played funny characters but I think the viewers will probably feel frightened watching him in this movie.

Q: After appearing in the sitcom "High Kick Through The Roof", Yoon Si-yoon is working on the drama "Bread, Love and Dreams" as well as this movie. How does it feel to be so busy?
Yoon Si-yoon (Yoon): I have been lucky enough to do three projects consecutively. I feel like I am learning something rather than I am working on something. You can't take a break from learning so I am working hard to study acting, even cutting down on my sleep. It is fun to learn something and applying what I learned to acting.

Q: Your character in the film is an incredibly loyal person. What were you really like in school?
Yoon: I loved being with people, so I felt happier goofing around and hanging out with friends than studying.

Q: Kim Soo-ro has recently taken on many teacher roles such as in the film "Our School E.T" and KBS TV series "Master of Study" and worked with young actors. If you had to recommend one promising actor in this movie, who would you pick?
Kim Soo-ro (Kim): I was actually more interested in playing a student rather than a teacher. One of the movies that had a big influence on me was the film "Yalgae", about kids studying at the academy. I was busy doing theater in my twenties and couldn't do those [student] roles, and now this much time has passed. There are so many promising youngsters here and if just pick one person, I will get a Chuseok [Korean Thanksgiving] present from that person and bad Internet comments from the rest. (laugh) Instead of picking one young actor, I am happy to work with good kids like Miss Ji-yeon, Miss Hwang Jung-eum and Mr. Yoon Si-yoon.

Q: Then what was your first impression of young actor Yoon Si-yoon?
Kim: He is extremely serious, modest and faithful to the scenes. He is a young actor who surprises me in many ways. When you work with many newcomer actors, you see that those who have the potential to grow big are a little different. And this kid [referring to Yoon] is, wow, he is a whole lot different. I really thought that he was going to do well and swoosh, he succeeded in "Bread, Love and Dreams". If he goes swoosh and does well with this film, then he would be swooshing in both directions. What Do You Do? about that? (laugh) Anyway, Yoon Si-yoon is truly remarkable.

Q: And now it is Yoon Si-yoon's turn. What was your first impression of Kim Soo-ro?
Yoon: In one word, he was cheerful and warm-hearted just like I had seen him on TV. He is comfortable to be around like someone I had known for a long time, and it's great.

Q: It is the first film for Jiyeon and the first horror movie for Hwang Jung-eum. You must have certain feelings about the movie, what was it like?
Jiyeon (Park): It still feel awkward to act, but I hope the viewers will look at me favorably. Compared to the time I spent shooting the film, I think I appeared in the movie more than I expected. So I like it.
Hwang Jung-eum (Hwang): I had so much fun watching the first movie and I liked the character when I read the script for this film. It was an extension of my character in "High Kick Through The Roof", but there was a twist at the end and I thought it was a three-dimensional character. I am ashamed that my acting is going to be displayed on a big screen but, at the same time, my heart is pounding.

Q: The underwater scene was impressive. Did Park Eun-bin, who plays a swimmer in the film, prepare anything in particular?
Park Eun-bin (Park): I didn't know how to swim but I got to learn this time. I have always been afraid of the water and I even had to go about five meters into the water. Plus, I had to go to school while I was working on the movie. I fainted for the first time while I was shooting it.

Q: There must have been some scenes that terrified you during the shooting even if you were aware of everything in the script.
Park: The scariest scene was when I was standing on the diving board. I am afraid of heights and the water, so can you imagine how scared I must have been when those two fears overlapped?
Hwang: What freaked me out the most was the dummy doll made after a human being. It was so terrifying that I thought it might haunt me in my dreams.

Q: Were there any instances where you saw a ghost during the shooting?
Park: We were filming a scene where Hyun-ah (played by Nam Bo-ra) is hurting herself and dying, then suddenly the director yelled 'cut'. All the actors stopped acting and looked at the director, but the director shouted why we were stopping. The director said that he did not call out 'cut' but when we monitored the scene, there was clearly a voice that said 'cut' at that very scene.

Q: In the final scene, Yoon Si-yoon is doing CPR on Jiyeon. How did it feel at the time?
Yoon: I was engrossed [in the scene] the first time we shot it but I put in too much air. (laugh) So Ji-yeon came out looking this big, like a blowfish. Scene like these were more difficult to shoot than I thought and made me nervous.

Q: There were a couple of scenes in the film that are clearly serious but makes you burst into laughter -- such as the CPR scene you just mentioned and the part where Yoon Si-yoon throws a lighter.
Yoo: The lighter-throwing scene was not intended to provoke laughter. It was a situation where the characters escape from the school after having been locked inside the building, so I was trying to think of a way to blow up the steel door in a bit more thrilling way. I wanted to unfold the story in a unique, brilliant way rather than telling it in a realistic way.

"Kim Soo-ro says "Yoon Si-yoon is truly remarkable" "
by HanCinema is licensed under a Creative Commons Attribution-Share Alike 3.0 Unported License.
Based on a work from this source