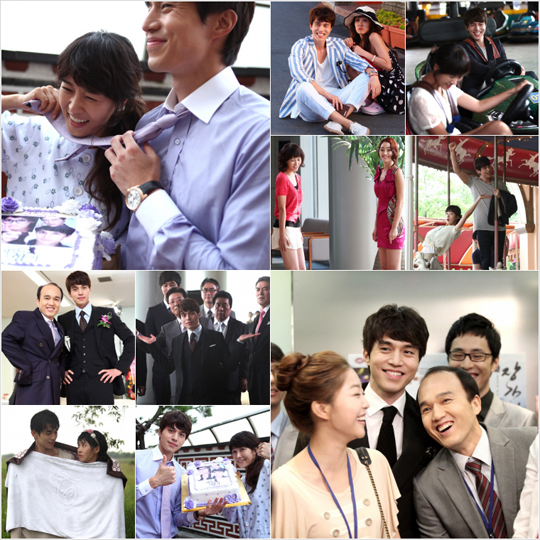 Kim Sun-ah and Lee Dong-wook were in the pictures from the 'stress zero' shooting site full of laughter.

In the SBS drama "Scent of a Woman", Kim Sun-ah and Lee Dong-wook took on the roles of a woman who was given a short span of life to live and the son to a travel agency where she used to work as a low-ranking employee.

Pictures that have the same kind of loving atmosphere are drawing eyes. Hard working people are full of energy and creating such a bright atmosphere.

The conditions given have not been that great due to the continuous rain but all of the actors and actress' 'positive attitude' is making the atmosphere cheery.

A Match Made in Heaven Kim Sun-ah and Lee Dong-wook bring out laughter amongst the staff with their funny jokes and their quick reactions help them deal with the NG's as well. Their charms and cheerfulness act as energy sources for the exhausted staff and fellow actors.

Supporting actors like Eom Ki-joon, Seo Hyo-rim and Kim Kwang-kyu also help in lifting the mood. Seo Hyo-rim acts the cold and mean person in the drama but she is actually the most charming one of all. She is always smiling and cute when the camera isn't rolling.

The production says, "The actors and staff have become one and are helping each other make it through the drama. The exhausting shoot goes on but the teams' professional energy is helping. The viewers response to the drama is also a big consolation to us all".

Meanwhile, "Scent of a Woman" started romance not too long ago but Yeon-jae said goodbye to Ji-wook.

"Kim Sun-ah and Lee Dong-wook pictures from site"
by HanCinema is licensed under a Creative Commons Attribution-Share Alike 3.0 Unported License.
Based on a work from this source