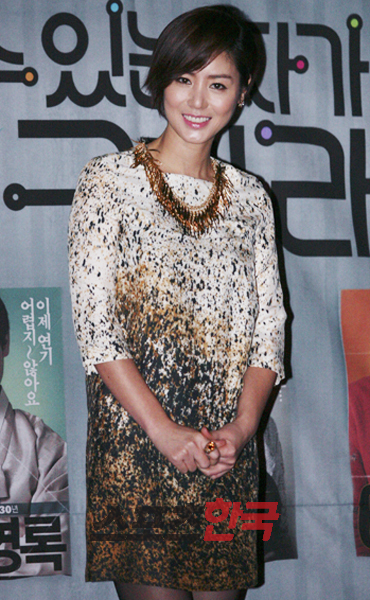 Sources say she has been confirmed a role in the upcoming SBS drama "Yawang". She is going to take on a role of a 2nd generation plutocrat and one that is going to cast an important influence on Soo Ae and kwon Sang-woo's lives.

Kim Sung-ryung performed the role of Seo ji-soo, an elegant and proud opera singer and plutocrat in the SBS "THE CHASER - Drama", outstandingly well. She has become a 'plutocrat' actress with her second rich role in "Yawang".

"Yawang" is a sequel to SBS drama "Daemul - Big Thing". Da-hae (Soo Ae) dreams of getting away from poverty and becoming the First Lady and Ha-ryu (kwon Sang-woo) sacrifices everything for her but becomes betrayed.

"Yawang" will go into production once script reading is over on the 6th.

"Kim Sung-ryung joins "Yawang""
by HanCinema is licensed under a Creative Commons Attribution-Share Alike 3.0 Unported License.
Based on a work from this source