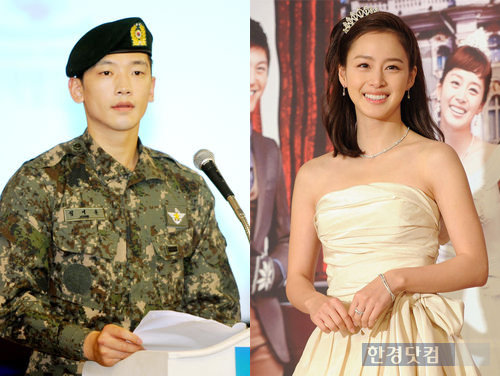 Actress Kim Tae-hee admitted to being in a relationship with singer Rain (Jeong Ji-hoon).

Kim's agency reported through media, "It's true they have been seeing each other but they are currently in the stage of getting to know each other. It's been about a month since they've started seeing each other".

"They are both very well known stars so they have very limited time to see each other and the places they can go are very limited. With the given circumstances, they developed different feelings for each other little by little although it's hard for them to open up to each other".

According to sources, Rain received a vacation of 5 days before Christmas and they spent the holidays together. Some netizens say that his vacation days are more compared to other solders and are questioning if he received military favors.

Previously Rain has once been in a rumor regarding military favors in October when Democratic Unionist Party member of Parliament Lee Seok-hyeon claimed preferential treatment during the inspection of National Defense.

Not only that, a citizen had once made a civil complaint titled, "Report of a soldier on leave and breach of military regulations".

This citizen had pointed out that Rain wasn't wearing his field cap in a media picture and being a representing soldier of the nation, it was a big loss of dignity to be walking around without his cap in a civilian area.

A soldier must be wearing his cap while he is in his battle suit even during vacation. An act of breach will result in limitations of vacation or even confinement in a guardhouse.

"Kim Tae-hee admits to relationship with Rain"
by HanCinema is licensed under a Creative Commons Attribution-Share Alike 3.0 Unported License.
Based on a work from this source