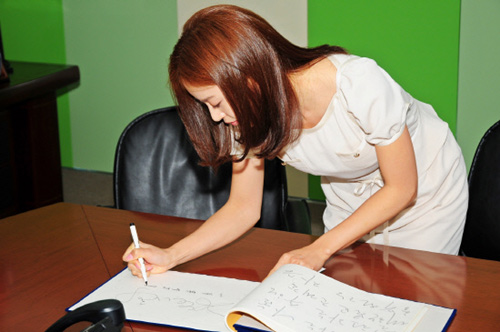 Actress Kim Tae-hee attended an event to support people with Hansen's disease, or leprosy, held on Sorok Island, Goheung, South Jeolla Province, on Tuesday. It was held in Sorokdo National Hospital to mark the 95th anniversary of its establishment, with over 5,000 patients and their family members attending.

Kim also visited a patients' residential center under construction and held an autograph-signing session for the patients, their families and the medical staff working at Sorok Island.

Kim Tae-hee leaves a message in a guest book during her visit to Sorok Island on Tuesday.

"Kim happily decided to visit the island and attend this important event after hearing from the hospital that the patients wanted to meet her", Kim's management agency said.

The residential center, called Hope Village, replaces old accommodation buildings and is being built with sponsorship from Daewoo Shipbuilding & Marine Engineering. The first stage of construction, a building housing eight households, was completed two years ago.

The second stage, being built with a budget of W500 million, consists of common facilities and landscaping (US$1=W1,089). The shipbuilder's CEO Nam Sang-tae said, "I hope Sorok Island will become a world center for the recovery of patients with Hansen's disease".