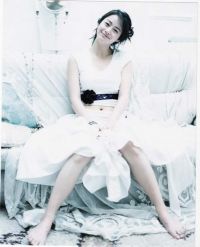 Actress Kim Tae-hee said Monday that she had been severely hurt by a controversy over her acting ability.

"I admit that there are problems in my acting. But I want to see `Iris' mark a turning point in my acting career", said Kim amid cheers in an interview with Yonhap News, referring to the TV drama now being broadcast on KBS TV. "I have hardly been shaken by groundless rumors but the dispute over my acting is most painful".

Kim, 29, is said to be one of the most beautiful actresses in the country. She received a bachelor's degree in fashion design at the prestigious Seoul National University.

Kim rose to stardom through her portrayal of an evil stepsister in "Stairway to Heaven", the SBS TV series, in 2003.

"I have a complex about myself. After starting my acting career, I found my future bleak. Still, I feel it very difficult to act", said Kim who reportedly achieved perfect scores in every subject during her three years in middle school in Ulsan, the southeastern industrial city.

She is now playing the role of a profiler at the state intelligence agency in "IRIS", where she falls in love with a colleague agent played by actor Lee Byung-hun. The drama's viewing rate surpassed 30 percent last week.