Kim Tae-hee Wins Over Viewers with 'My Princess' 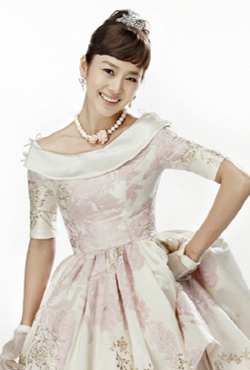 Her stunning beauty is beyond dispute, but actress Kim Tae-hee has always been criticized for her wooden acting. She struggled even more in films than on TV, and none of her movies, including "The Restless", "Venus and Mars" and "Grand Prix", were a success at the box office.

But the soap "My Princess", currently on MBC, seems to have changed all that, and viewers have taken to Kim's adorable but comic character in a big way. They seem to enjoy seeing the inelegant side of someone who seems to have it all. And criticism of her acting skills seems on the wane.

"Viewers cheer when an actor shows a side that has never been seen before", one critic says. "But when the actor still gets criticized for their acting afterwards they tend to go back to their old image, and that can be fatal". In other words, the real test for Kim starts after "My Princess".

Of course, there are still some people criticizing Kim's acting on the web board of the "My Princess" homepage. In fact, Kim is perhaps the epitome of a star who appears in more commercials than films or TV series.

Others include Kim Hee-sun, Jun Ji-hyun, Ko So-young and Lee Young-ae. More recently, hin Min-ah and Lee Min-jung also raised their profile through commercials before being cast in leading roles in films or TV series.

But while the financial rewards are great, viewers tend to disapprove. Woon Goon-il, a former SBS executive, said, "Actors should communicate with their audience through proper work with a story. If they shun it and bury themselves in commercials, their career is inevitably cut short".