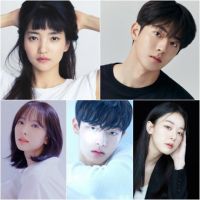 The drama "Twenty-Five Twenty-One" which will air in the first half of next year, is a youth romance about what happens when twenty-two and eighteen, fall in love and turn twenty-five and twenty-one. It reminds us of the pure and fierce growth period of immature youth, the excitement of confusion between friendship and love and the youth who share difficult worries.

Kim Tae-ri will play Na Hee-do, who stands tall as a member of the fencing sabre national team after many twists and turns in high school, where her team disappeared due to the IMF. Nam Joo-hyuk plays the role of Baek Yi-jin, who becomes a reporter after living toughly as the eldest son of a family shattered by the IMF. Bona will play the role of Ko Yoo-rim, the youngest fencing gold medalist who will rival Na Hee-do at the age of eighteen.