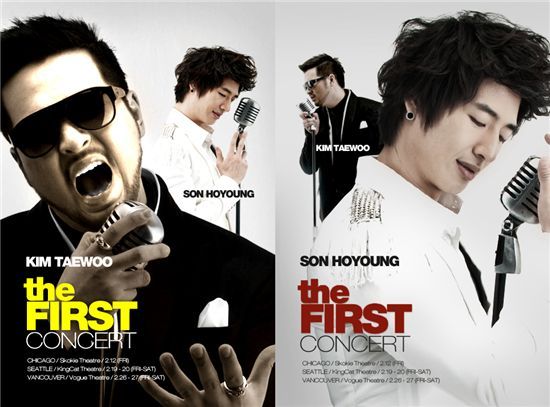 Korean pop singers Kim Tae-woo-I and Son Ho-young will jointly hold concerts in the United States which will be sponsored by major corporations in the country.

Verizon is one of the major mobile communication services in the U.S. while Cell Town represents Verizon Wireless in Asia.

"Through this concert, we hope to show other companies that the Asian market has many possibilities. We are putting efforts to make this a memorable concert to represent the Korean culture", an official from Cell Town explained in its reason for sponsoring the shows.

The tour, titled "The First.".., will kick off in Chicago on February 12 followed by performances in Seattle and Vancouver.

Singers Kim and Son first debuted together in 1999 in the now-disbanded boy band group GOD. The two have pursued solo singing careers ever since, with Kim in particular seeing a successful year in 2009 with his hit single "Love Rain".

"Kim Tae-woo-I, Son Ho-young U.S. tour wins major sponsors"
by HanCinema is licensed under a Creative Commons Attribution-Share Alike 3.0 Unported License.
Based on a work from this source