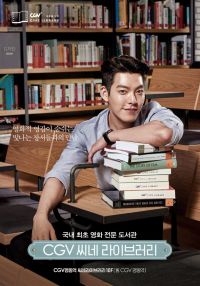 He'll be starring in the CGV Cine Library promotional video and other various campaigns.

Kim Woo-bin has a good public reputation and is most wanted by the younger generations so he's expected to gather attention for independence and artistic movies.

First of all, Kim Woo-bin agreed to star in the campaigns and advertisements without charge. This is exceptional as he is an actor who is highly paid.

Also, Kim Woo-bin is donating hundreds of millions won worth of books to the CGV Cine Library and will support the finances needed to make 1 independent movie. This is for the public to get a wider view of the films.

Meanwhile, CGV Art House was first established in October of 2004 for the purpose of discovering and expanding independence movies and runs 22 theaters in 17 CGVs nationwide.

"Kim Woo-bin supports independent and artistic movies with CGV Art House"
by HanCinema is licensed under a Creative Commons Attribution-Share Alike 3.0 Unported License.
Based on a work from this source