Kim Yuna, Most Memorable Ad Model For First Half of 2011 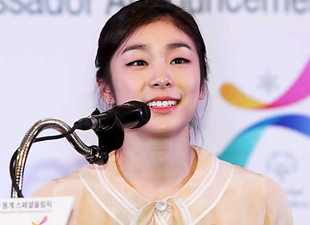 World-renowned figure skater Kim Yuna leaves deep impressions not only on the ice, but through her many advertisements.

According to a report on the most memorable ad model for the first half of 2011 conducted by government organizations, Kim came out on top with 10.5% of the votes. This is her third win after being number one in 2009 and 2010.

Actor Hyun Bin who swept Korea by storm with his character in the drama "Secret Garden" and is now serving the Marine Corps was in second place with 9.8%. Lee Seung-gi, considered one of the biggest faces on TV for his roles in "1 Night 2 Days", "Strong Heart", and various dramas, was a close third with 9.2%.

Considered the all-around perfect woman, Kim Tae-hee was fourth with 4.7%, Go Hyun-jung aka "Skin Beauty" was next with 3.3%. Won Bin, having blown everyone away with his acting in "The Man From Nowhere" was selected as 6th place with 3.2%. Another athlete, soccer player Cha Doo-ri was at 7th with 2.4%.

8th place with 2.3% went to singer IU, noted for her three octave vocal skills, 9th to international soccer star Park Ji-sung with 2.2%, and Kang Ho-dong, the nation's MC was 10th with 2%.

Many of the stars that were included in the top 10 for 2010 were pushed out this year, such as Shin Min-ah, Jang Dong-gun, Kim Hye-soo, Rain, and Lee Hyori.

The Korean Broadcasting Advertisement Corporation has been conducting such studies every year from 1999 on with a sample of 6,000 Koreans. However, 2011's survey was conducted among 3,000 participants.

"Kim Yuna, Most Memorable Ad Model For First Half of 2011"
by HanCinema is licensed under a Creative Commons Attribution-Share Alike 3.0 Unported License.
Based on a work from this source