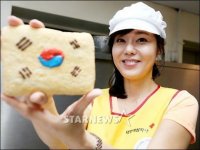 Kim Yunjin has become the first actress from Asia to ever grace the front of the U.S'.s TV Guide weekly. In the issue that hits stands next Monday, the actress appears with her small-screen husband Daniel Dae Kim.


The publication, which has the highest circulation of any U.S. weekly, put Kim Yunjin on the cover as part of a special spread on "Lost" season three. It has been learned that Kim is to appear on the covers of three September editions of magazines.