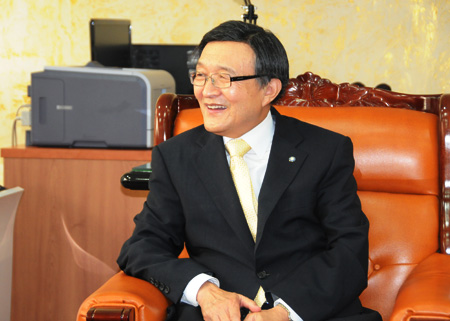 Park Eung-kyuk, president of the Korea Institute of Public Administration (KIPA), talks about the importance of the government's public relations efforts in an interview with The Korea Times at his office in Seoul, Monday./ Courtesy of KIPA

A state-run think tank under the Prime Minister's Office will host an international conference today at the Korea Press Center in Seoul with the theme, "Public Relations Strategy: Building Government Trust and Communication between Government and Citizens".

Park Eung-kyuk, president of the Korea Institute of Public Administration (KIPA), says he organized the event as he sees the public's distrust in the government and its policies creates unnecessary divisions and conflicts.

"The government's lack of awareness about the importance of public relations has led to social disharmony and public distrust as can be seen from the Mad Cow scare here in 2008",he said in an interview Monday.

Three years ago, hundreds of thousands of protesters took to the streets, denouncing the government's decision to resume the import of U.S. beef in April 2008.

In the wake of the months-long candlelight vigils, the Lee Myung-bak administration, which took office in February 2008, lost much of its momentum to push major initiatives including the merger of state-run firms.

Back then, the majority of Koreans believed that consuming U.S. beef posed a considerable risk to becoming infected by Mad Cow Disease, or bovine spongiform encephalopathy (BSE).

Today, the consumption of American beef is fast increasing as the public's perception has greatly improved as they realized that the media often exaggerated the possible dangers.

"It is important that the government effectively delivers facts and ideas to build trust with the public and better serve them in the course of policy making and execution", Park said.

"Even if the government seeks to implement a wonderful welfare policy with good intentions, its efforts would most likely end in vain if it cannot win the public's trust".

He noted that Korea has emerged as an exemplary country which has achieved unprecedented success in both industrialization and democratization, but public trust in government remains low.

"In reality, government policies such as large-scale national tasks and free trade agreements have not been properly made known to the public in the absence of publicizing efforts",Park said, noting a lack of communication between the government and citizens.

"In the era of open and global governance, it is necessary for government and people to execute national affairs cooperatively, based on mutual understanding and communication".

He said to achieve social development in a more harmonious and constructive way, it is necessary for the government to enhance public relations efforts and make its policies better known to the public.

Park also pointed out that local English-language media, including The Korea Times and Arirang TV, can be used as a window to Korea for government agencies struggling to deliver an accurate picture of Korea to the world.

"Korea's foreign reserve surpassed $300 billion and its economic fundamentals are strong",he said".Yet foreign credit rating agencies and media outlets often undervalue Korea's credit rating so low it would treat Korea similar to a country with a GDP per capita income of $3,000".