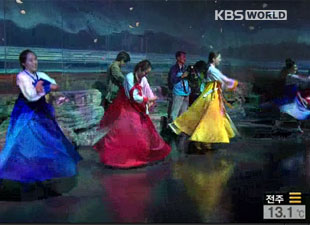 The Korean Pavilion at the Yeosu Expo has been revealed to the public following the finishing of its construction on Thursday.

The curtains were lifted to reveal beautiful scenery of the Aegean Sea reminiscent of an Oreintal painting on a 116 square-meter screen.

The theme of the Pavilion is "the spirit of our ocean and marine capacity". A 15 meter tall and 30 meter wide dome screen, which is the world's largest, provides realistic images.

One scene depicts the desert's miraculous power to transform seawater into fresh water, while another illustrates the strength of South Korea's shipping industry and its influence in the Pacific Rim.

The Korean Pavilion is the world's first eco-friendly building that emits zero carbon through the use of a hyro-cell system.

After the Yeosu Expo is over, the building will be harnessed to promote South Korea's determination to raise the global awareness of marine and environment protection.
Reported by KBS WORLD RadioContact the KBS News: englishweb@kbs.co.kr

"Korea Pavilion Completed at Yeosu Expo"
by HanCinema is licensed under a Creative Commons Attribution-Share Alike 3.0 Unported License.
Based on a work from this source