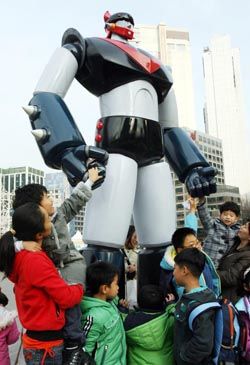 Seoul Metropolitan City displayed a giant statue of Taekwon V, the heroic robot star of Korea's first feature-length science fiction animation on Friday (Jan.5). The 3.5-meter-high, 2.4-ton statue stood valiantly in front of City Hall to commemorate the 30th anniversary of the time the nation's most famous robot hero began saving the day on movie screens in the winter of 1976-77.

The decision to display the giant robot came with the recognition of Taekwon V's status as a symbol of Korea forged through popular sequels up to 1990. Directed by Kim Chong-gi, the first "Robot Taekwon V" told the tale of a mechanical giant built by a Korean scientist and operated by his taekwondo champion eldest son.

In the first film, Taekwon V used precision martial arts to defeat giant robots built by a mad scientist out to kidnap the world's greatest athletes. Animators traced over live-action film movement projected onto a glass screen frame by frame in a process known as rotoscoping.

The cartoon was a mega hit, and the statue and digitally copied re-release are expected to make those in their 30s and 40s nostalgic for their childhood hero and garner a new generation of young fans.

The digitally restored version of the animation is scheduled for release in 150 theaters nationwide on January 18th. The original film was considered lost for over two decades until a duplicate print surfaced from a Korean Film Commission warehouse in 2003. Around 5,000 people worked for two years on the restoration project, which premiered at the Pusan International Film Festival in October 2005.

Taekwon V will guard the City Hall for next three days till January 8th.