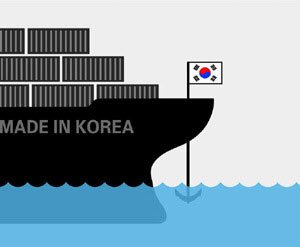 Korea's economy grew at the fastest clip in more than seven years in the third quarter of this year at 1.4 percent thanks to strong exports aided by pump-priming measures.

The figures have prompted economists to project three-percent growth for the whole year and predict that the Bank of Korea will raise the key interest rate before the end of the year.

The central bank on Thursday said third-quarter GDP stood at W392.7 trillion, up 1.4 percent from the previous quarter. That was the highest growth since the second quarter of 2010.

On-year the economy grew 3.6 percent, the highest since the first quarter of 2014. The growth was partly due to exporters speeding up shipments of products ahead of the 10-day Chuseok or Korean Thanksgiving break early this month.

Exports rose 6.1 percent from the previous quarter. That brings the government's goal of achieving three-percent growth this year within reach as cumulative growth in the first three quarters of this year already stands at 3.1 percent.

"Korea's Economic Growth Hits 7-Year High"
by HanCinema is licensed under a Creative Commons Attribution-Share Alike 3.0 Unported License.
Based on a work from this source