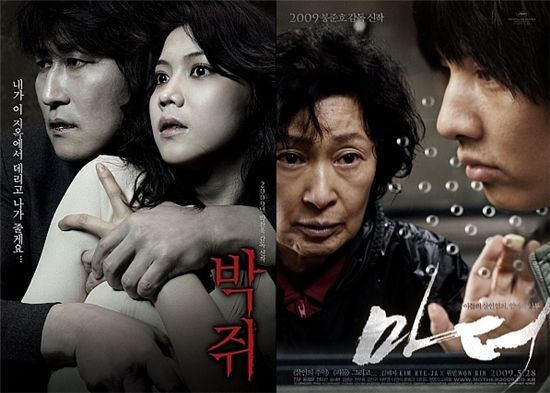 Korean films "Mother - 2009" and "Thirst" scored multiple wins including the prize for Best Picture at the 4th Asian Film Awards held Monday at the Hong Kong Convention and Exhibition Centre.

"Mother - 2009", helmed by noted Korean filmmaker Bong Joon-ho, claimed the top honor of the night, beating out five other Asian films including Hong Kong/China's "Bodyguards and Assassins" and Japan's "Parade".

The Korean director was also named Best Screenwriter for the critically acclaimed pic, which he co-wrote with Park Eun-kyo.

Veteran Korean actress Kim Hye-ja, who plays the mother in the film, added another Best Actress trophy under her belt for her portrayal of a mother who becomes obsessed over protecting her mentally challenged son, played by Hallyu star Won Bin. Kim has racked up several acting awards at numerous international film events for the role.

Korean films proved to be a dominant force at the Asian Film Awards this year, winning four trophies in major categories and scoring multiple nominations -- sometimes two in the same category -- including "Like You Know It All" for Best Screenwriter, "Thirst" for Best Cinematographer and Best Production Designer, "Running Turtle" for Best Composer and "Mother - 2009" for Best Editor and "The Sword with No Name" for Best Costume Designer.