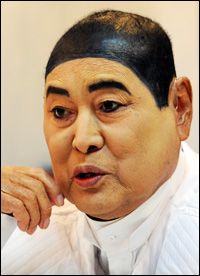 Andre Kim was considered the first male Korean designer, and an unofficial ambassador of Korean fashion to the world.

At a young age, Kim said he was always interested in the arts, and wanted to become an artist, or poet. He attended Hanyoung High School, and graduated from the Kookje Fashion Design Academy, established by famous designer Choi Kyung-ja in 1961.

In 1962, the then 27-year-old Kim presented his first fashion collection, and opened Salon Andre Kim in Sogong-dong, downtown Seoul. A diplomat from the French Embassy gave him the name "Andre" saying he would need an "easy foreign name" to become a world-class designer.

In 1966, he became the first Korean designer to hold a fashion show in Paris, where the French paper Le Figaro aptly described him as a "magician from fairyland".

He always believed fashion was an important tool to introduce and highlight Korea's rich culture and arts to an international audience. Throughout his career, he staged countless fashion shows in Korea and abroad, including New York, Washington, Barcelona, Cairo, Sydney, Beijing, Shanghai, Bali and Cambodia.

"It is very important to combine artistic and cultural imagination together with fashion. Most strongly, I want to impress citizens from around the world with Korea's very high culture and sophisticated, very artistic fashion. This is very important to do internationally", Kim said in an interview with The Korea Times in 2008.

Kim's shows, which he called "fashion art collections", were always characterized by his use of white and his elaborately detailed ball gowns inspired by Korean, Oriental and European culture.

Considered a pioneer in Korean fashion, he would invite beautiful celebrities as models to show off his decadent, richly embroidered gowns and suits. It is a testament to Kim's influence and power that he was able to get many of Korea's biggest stars such as Song Seung-heon, Jang Dong-gun, Won Bin, kwon Sang-woo, Choi Ji-woo, Lee Young-ae, Kim Tae-hee and Song Hye-kyo, to appear on the catwalk.

He also made himself a worldwide name as stars such as Michael Jackson, Nastassja Kinski and Brooke Shields wore his works.

"I have great pride in my country and Asia, and this is very important for my purpose. Internationally, European arts and culture are better known. But I wanted to show ― through my artistic fashion collection ― that Korea is also very artistic. I wanted to show Korea's rich and high culture to impress them", Kim said.

He is known for cultivating close ties with the diplomatic community, sometimes even inviting ambassadors and their partners to appear in his shows as presenters or even models.

Kim received many accolades at home and abroad. In 1982, he received a Cultural Merit Award from the Italian government. He became the first fashion designer to receive the Korean Presidential Culture and Art Medal in 1997. In 1999, the San Francisco city government even established Andre Kim Day, and in 2000 he received an Art and Literature medal from the French government.

In 2008, Kim received the Bo Gwan Order of Culture Merit from the Korean government, in appreciation of his outstanding contribution to the promotion of culture through fashion.

He was named chief designer for the 1981 Miss Universe beauty pageant, and designed the Korean athletes' uniforms for the 1988 Seoul Olympic Games. Kim was also appointed UNICEF goodwill ambassador in 2003.

"Korea's premier fashion icon Andre Kim leaves lasting legacy"
by HanCinema is licensed under a Creative Commons Attribution-Share Alike 3.0 Unported License.
Based on a work from this source